Matt and I have been talking about prescription drugs and I gradually was getting more irritated that when I was in considerable pain after a hip replacement all I could get was Tylenol 3 which I have to say is a totally useless painkiller, however neither my surgeon nor, subsequently my doctor, would give me (or Matt after his surgeries) anything stronger in case I became addicted. So, basically, I had to suffer pain. Meanwhile, those with money, or in the know, can find "enablers" so that they can get as much OxyContin and Demerol as they want as well as any other pain killers. Obviously they are addicted but I am not nor am I likely to be so because these pain killers are not freely available to me, but please, do give me them when I am in serious pain. Once again, it is the story of the few who get addicted ruining it for the rest of us who genuinely need the help of such pain killers. I remember in 1989 the British did a study of patients who were given opiates for extreme pain and then it was discovered when such patients were weaned off because their pain had lessened, most addiction was not permanent. I googled and found the following: read this article which will explain it more succinctly. Marilyn Tomlins (French Marilyn's Blog) directed me to an article about 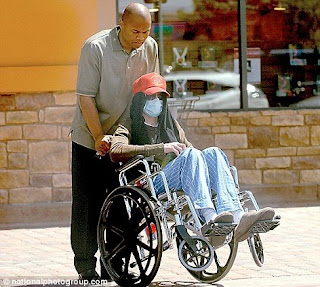 Michael Jackson which was in Britain's Daily Mail. I found it very interesting if somewhat long. I thought you too might like to read it. Apparently the author Ian Halpern has a lot of insider knowledge. He says there is no way Michael could have coped with 50 concerts in his extremely frail state of health. Not only that, but his lungs were shot so he couldn't sing any more. A very tragic tale.

Tomorrow is Canada Day, once known as Dominion Day. It changed in 1982, since we first came here, although I gather a lot of sources still call it that. Apart from anything else, you can guarantee lots of fireworks which will be visible from our balcony. The celebrations get bigger every year and lots of households fly the flag all week and especially on the day, July 1. Plus there will be lots of barbecues and lots of parties.

I forgot to mention that Paul Potts, the winner of Britain's Got Talent a year or so ago, is performing at Centre in the Square which is our local theatre. His show is today, I hadn't realised that, I guess I have missed it. Just checked, no tickets are available anyway. I am so glad for Paul that he is selling out at his concerts. Our Cuban Pork was good last night by the way and we have leftovers for supper tonight. Also, Matt's foot is 99% better - he still has a few more antibiotics to take but the wound has healed up well. Here's a good recipe from Eating Well which can be done on a barbecue either for Canada Day or for the 4th of July. Unfortunately local corn, as shown in the picture, is not yet ready although I am getting hungry for it. Local asparagus will be unavailable any day now. Pork Chops with Peach Barbecue Sauce 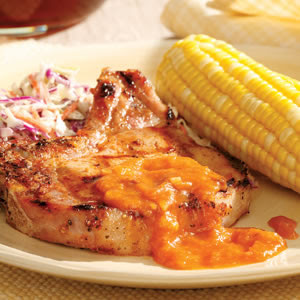 1. Place 1/4 cup salt and brown sugar in a medium heatproof bowl. Pour in boiling water and stir to dissolve. Add ice cubes and stir to cool. Add pork chops, cover and refrigerate for at least 30 minutes or up to 4 hours. 2. Puree peaches, tomato and vinegar in a food processor until smooth. 3. About 30 minutes before you’re ready to cook the pork chops, heat oil in a medium saucepan over medium-high heat. Add onion and cook, stirring occasionally, until golden brown, 5 to 7 minutes. Add ginger and cook, stirring frequently, until fragrant, 1 to 2 minutes. Add the peach puree, the remaining 1/2 teaspoon salt, honey and pepper to taste. Bring to a boil over high heat, then reduce the heat to a simmer. Cook until reduced by about half, 20 to 25 minutes. Reserve 1/4 cup of the sauce for basting the chops; keep the remaining sauce warm in the saucepan until ready to serve. 4. Preheat grill to medium. 5. Remove the pork chops from the brine (discard brine), rinse well, and thoroughly dry with paper towels. Season the chops with 1/4 teaspoon pepper and brush both sides with some of the reserved sauce. 6. Grill the pork chops, turning once, until an instant-read thermometer inserted into the center registers 145°F, 2 to 4 minutes per side. Transfer to a plate, tent with foil and let rest for 5 minutes. Serve with the warm peach barbecue sauce on the side.

Brine the pork chops (Step 1) for up to 4 hours. Refrigerate the peach barbecue sauce (Step 3) for up to 5 days.