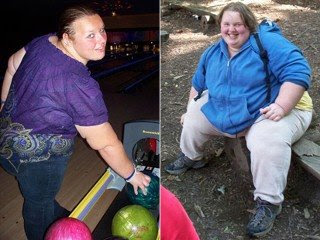 Watching a segment on GMA this morning about a young English girl, Georgia Davis, who weighed over 400 lbs. She was absolutely huge and only in her early to mid teens. Social workers in the UK helped her get to the Wellspring Academy in North Carolina and in 9 months she has dropped to 202 lbs. which, to me who took a year to lose 20 lbs recently, is absolutely incredible. read here. She is now on her way home to England and I do so hope she can maintain her healthy lifestyle. She has to look after her mother so it won't be easy for her. From the pictures, her mother too is overweight. The Academy emphasises movement too and Georgia had a pedometer as a virtually permanent attachment. She must have been at the GMA studios really early this morning (it runs from 7-9 a.m.) and yet had already done 4,000 steps.

Glenda, at Tropic Temper (see link this page) was again writing about the horrific story of two Malaysian charlatans who, in the name of religion, are beating 'witches' to death because of the spells they are casting on certain Malaysians residing in England. Although this is happening in the civilised West, little is being done about it. Do read her blog today. I see the religious organisation has a web site as well.

Yesterday, I promised a recipe which we had eaten for dinner the previous night. Here it is. It came from the bag in which we had bought Royal Sea haddock loins which were very nice pieces of fresh haddock. Royal Sea is only sold at Costco so if you don't have one in your area, you will just have to go to your local seafood place and ask for haddock loins or just have nice fillets of haddock. We enjoyed this dish very much. 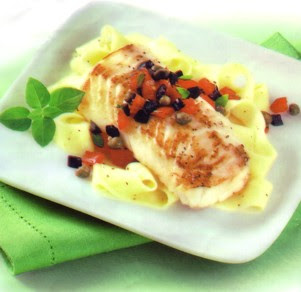 In a bowl combine tomatoes, basil, capers, black olives, oil, vinegar and half the oregano. Stir, cover and refrigerate until needed. Heat canola in a non-stick skillet over medium-high heat. Rub oregano on both sides of the Haddock loins and season with salt and pepper. Pan sear Haddock in heated pan for three minutes. Flip and cook other side for same amount of time or until fish is opaque or begins to flake. Transfer fish onto a plate and spoon Salsa on top. Serve over cooked pasta tossed in olive oil and oregano.
Servings: 2
Source: Royal Sea
Posted by Jo at 9:00 AM