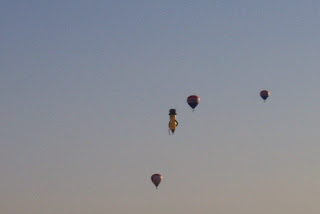 Last night I took a pic of balloons passing by, not a great picture, Matt would have got a better one, but he had no film. Anyway, there were several balloons, 5 altogether, including a Mr. Peanut one which we have never seen before. If you click on it, you can see a bigger picture. We don't usually see so many balloons at once, especially since the episode of one catching fire, but maybe people have decided to risk it or its not so immediate or something. Satima (see Satima's Blogspot) got me going on a couple of quizzes today, so I did the Mythology test and this was my result.

Frey was, just like his twin sister Freya, a member of the Vanir family and thus a God of fertility and love. Along with Odin and Thor he was one of the most popular Norse Gods, and received many offerings. He was said to have control of the weather, both rain and sunshine, thus the fertility of the earth. Prayers were also offered to Frey for a good future, peace and prosperity.

Frey is described as being handsome, powerful, merciful and kind. Fitting considered he was - let’s be frank - the God of sex. His cult included songs and actions which shocked contemporary and later Christians, who condemned them as indecent, which they of course were not to the participants in the cult themselves.

Frey lived in Alfheim, "Elf-home", a name which indicates a possible connection between Vanir and Elves. His servant was the Goddess Beyla, who was all about bees and dairy. Not to far off, I think, as "Milk and Honey" and the things that Frey stands for are equally sweet.

so then I did the literary character test

The great King, whose quest would see success only while he remained above his human imperfections. Unfortunately, that would not last.

I have always been interested in the Arthurian legends. As I wrote, I recently read the Camulod Chronicles by Jack Whyte which were some of the best books on the legends I have ever read.

Tonight I am cooking the turkey breast and we are planning to have Indian Style Cauliflower with it. We have eaten this before and its delicious. It goes well with poultry too. 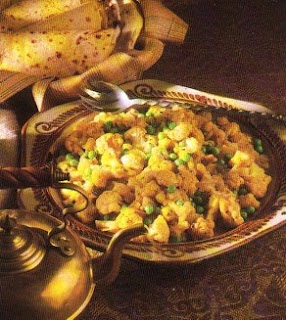 3/4 tsp each ground ginger and cumin

1 medium sized head of cauliflower, cored and broken into florets

In a 10 inch nonstick skillet, combine the onion, stock, chutney, mustard, basil, ginger, cumin, salt, cinnamon and curry powder. Bring to a simmer and cook, covered for 6 minutes. Add the cauliflower and cook, covered, for 5 minutes over moderately low heat. Add the peas, cover and cook 4 to 5 minutes more or until the cauliflower is crisp tender. Stir in the cornstarch mixture, vinegar and red pepper sauce and cook for 1 minute or until the sauce has thickened. Serve hot or at room temperature. Serves 4 to 6.