We watched 20/20 last night, way too many ad breaks, but the bits in between the ads were very interesting. It wasn't just about tornado safety, but other forms of weather myths too. I had believed, along with millions, that if your car was hit by lightening it was the contact of rubber tires on the earth which saved you, apparently not, it is because the lightening shoots round the metal frame of the car and out onto the ground, this is what saves you. If there is a tornado, don't try and outrun it, you can't, get out of the car (which they described as a 4,000 lb. toy to a tornado) and try and lie down in a ditch. In a house, get in the basement. Don't bother opening the windows to equalise air pressure, the tornado will open your windows for you very quickly. Never drive through a

flooded road however shallow you think it may be. Your car can be damaged very quickly and you could be stuck in a dangerous situation. Again, with lightening, you are likely to be safe in a wood so long as all the trees are the same size, but don't shelter under a single tree or the tallest tree in the wood, get out of the storm into proper shelter if you possibly can. They pointed out how often tall buildings such as the Eiffel Tower and the Empire State building get hit frequently every year.

Talking of the Eiffel Tower, did you know you can walk up it. Daughter #1 did so, she is fit enough. When I was there, I took the elevators. I was very impressed with how the French decorated it for the Millenium celebrations, it was a mass of lights, quite beautiful.

I have been reading a blog by Glenda Larke (see Tropic Temper on this page). She has been visiting Western Australia and has published some of the most beautiful pictures of beaches in Cape Le Grand National Park at Esperance, they remind me of the Caribbean, but there are no people, no crowds, no giant hotel or vacation complexes, just gorgeous beaches and scenery. What a pity Australia is so far away, I would be on the next plane.

Well, the shrimp are being marinated for tonight, the pork tenderloins are presently defrosting, and things are well on their way. Matt is doing most of the rest, I just have to clean the place up a bit. I am not up in the ranks of good housewives unfortunateley, I consider it soul destroying to have to dust and vacuum etc. especially as it is a job that doesn't stay "done".

Here is a starter we have made on occasion, usually the version with cheese and ham in it. We enjoy it very much. You have to be a tad careful not to overcook the yolk because the cream can make it appear the egg is not cooked. 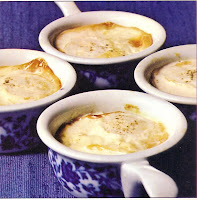 Set oven to 350F. Butter the dish or individual ramekins. Add the ham and cheese to the bottom. Carefully slide an egg into each ramekin and season to taste. Spoon cream onto each dish. Set ramekins, or dish, onto a baking sheet and cook in pre-heated oven for 10 minutes until the whites are jellied and the yolks are barely set.

I use a bit more cream. You could also use tomato sauce instead of cream. And you could use shredded chicken, or sautéed sliced chicken liver on the bottom.