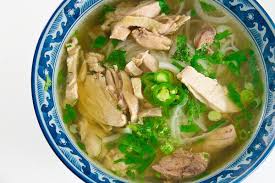 Having finished the rest of our Pho Ga Tuesday evening, I thought about the pronunciation which my friend said she thought was "fuh" - I figured she was right but checked it on Google and yes, that is how one says it. My friend also makes her Pho from scratch with the meat bones to make a good base. I am afraid I am too lazy, achy, whatever to do that and I find Campbell's Pho in cartons to be very good. What we ended up looked very much like the picture. I have twice fried shallots until they were crispy as in my recipe, but I don't see the point of getting them crispy because the soften up in the soup almost instantly. I don't like them because they make me cry. For years I have been mostly using sweet onions (Vidalias when I can get them) and as they say, the only time Vidalias make you cry is when you can't get them - sounds like asparagus to me LOL

Had our tootsies done - amazing how quickly 6 weeks goes by. Then after lunch we went shopping - we did what we thought was a light shop, ha! It wasn't a light bill. I bought myself some more chicken thighs and cartons of Pho (2 for $5) so I can make it when I want to again. It's good. I also bought a rotisserie chicken which I shall turn into several servings of what I call Leftover Chicken it was originally a Leftover turkey and Ham Pie from Paul Holliday of Great British Baking fame. I bought some leeks today, they are the biggest I have ever seen. Enough for my Chicken Dish and maybe some Leek and Mushroom Soup. I was talking to a woman in the checkout and telling her what I did with leeks. She had never cooked them but said her mom recently did Leek, Potato and Bacon Soup. Doesn't sound bad. I make Leek and Potato soup which, hot, is called Potager Parmentier and cold with a couple of chives and a lot of cream, becomes Vichysoisse. My all time favourite cold soup.

So I had to Google the Leek and Bacon soup didn't I? By the way, streaky bacon is like the bacon we get regularly in North America. 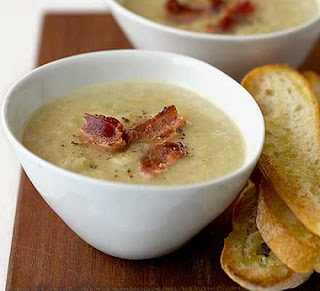 1. Melt the butter in a large pan, then fry the bacon and onion, stirring until they start to turn golden. Tip in the leeks and potatoes, stir well, then cover and turn down the heat. Cook gently for 5 mins, shaking the pan every now and then to make sure that the mixture doesn’t catch.

2. Pour in the stock, season well and bring to the boil. Cover and simmer for 20 mins until the vegetables are soft. Leave to cool for a few mins, then blend in a food processor in batches until smooth. Return to the pan, pour in the cream and stir well. Taste and season if necessary. Serve scattered with tasty crisp bacon and eat with toasted or warm crusty bread on the side.

Tips
For really crisp bacon, grill on medium-high until browned, then turn the bacon over with tongs and cook on the other side for about a minute more. Drain on kitchen paper, then crumble to serve.

Author Notes
This soup will keep in the fridge for a couple of days, but if you want to freeze it, don’t add the cream until you reheat it.