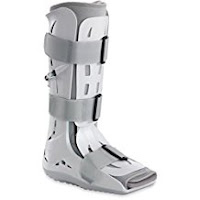 Christmas Eve night, it snowed - Christmas Day it snowed. First white Christmas I remember in quite a while. Only trouble was, we couldn't go to Mandarin for Christmas Dinner. Mind you, Matt had already said he couldn't make it anyway. He is getting around with his air boot and the Fracture Clinic surgeon told him he can take it off at night and not worry about using his foot when he needs to go to the bathroom. He is able to do the odd thing now and again. He has a shower stool, the kind that sticks out of the bath so you can sit on it and swivel into the bath. Also a toilet seat extension. It lifts you up quit a bit which helps one to stand up. Had one every time we had hip replacements. I just googled in order to find a picture of the boot and discovered Amazon.ca sells them for about $50. I haven't yet seen the bill, but I gather the hospital one is going to be charged at $175. What a rip off. Luckily I believe insurance pays for this. But that is why insurance is so damned expensive. OK there again we don't pay the premiums they are paid for as part of his employment package when he was working. But if they weren't being ripped off they could provide even more coverage, like outside Canada coverage which was negotiated away many years ago. The bath stool and toilet extension we get free for 2 weeks and then have to pay rental ourselves if we need it. I think the same applies with the walker he is using. Long term parking at the hospital is $14. However, I suppose we should be happy about that because we are getting the treatment free. I wasn't intending to rant until I saw the price of the boot at Amazon.

Talking of the aircast, it has the ability to be pumped up. The hospital Emergency pumped it, the physiotherapist pumped it, but when we got to the fracture clinic we found someone (not sure but possibly a nurse, how do you tell these days?) who explained properly that as Matt's leg was somewhat swollen it was wrong as well as unnecessary to pump up the boot and it was, in fact, oversqueezing his ankle/foot. He told us that when the swelling has gone down, then we can pump up the boot if necessary.

Our neighbours popped in briefly at lunchtime with a plate of goodies to say Merry Christmas. I had slipped a card under their door. Nice couple. He offered to drive if needed during this crappy weather. Luckily we don't have to drive for at least a day if not two. She was telling me she had asked permission to try and form a coffee club in the building. That should be fun.

I had planned this for Boxing Day but ended up cooking it for Christmas Day, not having a turkey handy. It turned out very well and we both enjoyed it. The recipe doesn't say anything about it, but if and when I make it again I think I will pin the bacon to the pork. Bit of a pain to do, and then one has to hunt for the pins after, but it will ensure the wrapping is more secure. 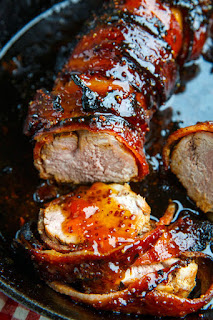 1. Rub the pork tenderloin with the mixture of the cajun seasoning and brown sugar and wrap it up in the bacon.

2. Heat an oven safe skillet over medium heat, add the bacon wrapped pork tenderloin and cook until it is browned on all sides, about 10-15 minutes.

3. Transfer the pan to a preheated 400F/200C oven, roast until the pork reaches 140F, about 10-15 minutes, brushing on the mixture of the apricot preserves and mustard near the end before setting aside it to rest, covered, for 5 minutes.