Saturday afternoon, just sitting quietly reading when we heard a knock on the door. It was a neighbour who had been cooking with her three grandsons making Christmas cookies and decided to share them with everyone. They had them all set out on a pretty tray which one of the boys was carrying. I thought it was such a nice gesture. I took one for Matt, told them my hips didn't like cookies (or words to that effect). Maybe I should have just taken a couple and shut up.

Friday we went to our LCBO (liquor store) to replace some wine and some bubbly. There was a taste testing taking place with two wines. One of which they recommended for cellaring for 10 years - you're joking, us cellar something for 10 years!! We hesitate to buy green bananas. However the second wine was Tenuta Frescobaldi di Castiglione which we both liked. The woman running the tasting assured us the wine had been drunk by Henry VIII. (Before or after he beheaded his wives). In fact, on the bottle it says it was supplied to the Papal Court and Henry VIII's court in the 1500s. That doesn't say Henry himself drank it, he might have, but who knows. It does say that this particular vineyard has been going for a year or two, or three. We bought a bottle and enjoyed it but Matt has decided it wasn't THAT special nor was it THAT expensive. Oh well.  I didn't see him leave any. I would recommend it as a very pleasant wine to have for dinner. We ate Korean Bulgogi with it, it seemed to match fairly well.

Have you heard of the Christmas Devil or Krampus? I never had, but there is a video provided by 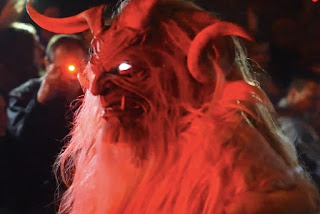 National Geographic showing a parade with Krampus taking part. I understand he originated in the Teutonic areas of Europe and is supposed to deal with kids who are "naughty" and don't deserve a visit from Santa. He visits them on December 5th - do watch the video. From the video seems a pretty frightening character to me. National Geographic say he is also popular in America!!!

We have had quite a bit more snow this weekend but as yet not enough to completely cover the grass or in our case mud. I assume there will be people in to landscape the grounds in the spring. I hope so anyway.

I have just discovered, from Viveka of My Guilty Pleasures, that you can cook risotto in the oven, so much easier than standing and stirring. As Viveka is, herself, a professional chef, her word on cooking is good.  She has posted a recipe for Risotto with spicy sausage. I have all the ingredients so will be trying it later this week.

Meanwhile I have resurrected a recipe for Chocolate Volcanoes which I love. Matt used to make them but he doesn't do much cooking any more and I have been buying them at the local grocery store.  I decided that is probably a bit of an expensive way to go hence finding the recipe. They were labelled as Warm Chocolate Cake so it took a bit to find it LOL. 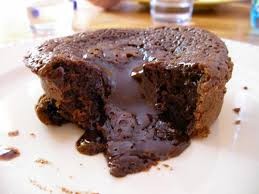 2. Beat together sugar and egg yolks with electric mixer until thick and creamy, about 4 mins.

3. Pour in chocolate mixture and beat together for 5 mins.

4. In a separate bowl, beat egg whites until stiff peaks form, about three mins. Fold into mixture along with flour.

5. Pour into 6 nonstick buttered moulds or non-stick muffin tins (we use cocottes or ramekins). Bake for 5 to 7 mins or until edges are just cooked and centre is still liquid. Cool for 5 mins in cooking dish. Carefully remove to serving dishes. Serve with lightly whipped cream

6. Freeze overnight or up to 2 weeks.

Preheat oven to 375 F. Take ramekins out of freezer and remove plastic wrap. Bake volcanoes for 18 minutes - no longer! Cool on rack for 5 minutes. The outsides will be crusty and the centers will be gooey - sort of like your average volcano