I was worn out today, did our weekly shop and then went to the liquor store. What a lot of walking. After unpacking all the shopping I was really glad to sit down. I have told you about points before, well beef was on points today so bought some steaks. Also a batch of chicken (on points) then used the $50 of points I already had to pay for it. In the meanwhile I earned another $18 on the things I bought today. I love this system, the cashiers ask people if they belong to the PC Plus points system and some say no, I think they are nuts. I bought another cauliflower (I think it was on points too) to do something else with cauliflower rice, I am a convert.

I said I would share this recipe with you, and here it is. We both enjoyed it, made enough for us for two days. As I said, I didn't use the Pomegranate because I really don't know how to eat the seeds anyway. According to the internet it is really up to you which you do. My mother loved them. I also adapted a few things and used powdered spices when I didn't have sticks or pods. I was pretty impressed with the cauliflower, I wouldn't have known what it was had anyone else served it to me, it was more like a grain. I have also altered the measurements from metric. 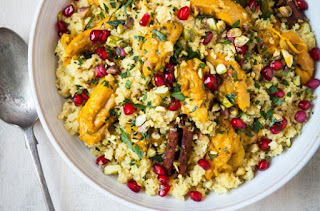 1. First prepare the chicken. If using thighs, trim off any fat, then slice them thinly. If using chicken breasts, cut them into 1/2 " chunks. Peel and slice the onion into thin crescents. Finely chop the garlic and ginger. Put the saffron in a bowl with a little hot water and leave it to steep.

2. Heat the oil in a large, lidded frying pan or a shallow casserole dish. When the pan is hot, add the chicken. Fry the chicken for a minute, stirring constantly, until the pieces have seared, then add the onion, garlic and ginger and fry for another couple of minutes. Add the whole spices and the bay leaves.

3. Pour the stock and the saffron with its water into the pan, then season with salt and pepper. Stir vigorously, scraping up any brown bits from the base of the pan. Bring the stock to the boil, then leave to simmer while you prepare the cauliflower – this should take about 5 minutes. Cut up the cauliflower and blitz to the size of coarse breadcrumbs in a food processor – use the stalks as well as the florets.

4. When the liquid has reduced so it just coats the base of the pan and the chicken and onion are tender, remove the chicken and most of the onion with a slotted spoon and keep them warm. Add the cauliflower to the pan and stir so it is coated with the remaining liquid and spices – it should start to turn a light ochre in patches.

5. Cook over a medium heat for at least 5 minutes, stirring regularly, until the cauliflower is cooked through and the remaining liquid has evaporated. The cauliflower should be fluffy. Put half the chicken and onion back into the pan and stir it through the cauliflower, then add the rest on top.

6. While the cauliflower is cooking, lightly crush or chop the pistachios and remove the seeds from the pomegranate. Serve the pilaf sprinkled with the pistachios, pomegranate seeds and herbs.

Author Notes
Leftovers can be stored in an airtight container in the fridge for up to 2 days.