Interesting article on why we eat eggs for breakfast. Apparently eating breakfast was a Roman thing and once they left Britain, we stopped eating breakfast. We ate dinner at 9 a.m. I couldn't believe that when I read it. Then eventually dinner got pushed back later and later in the day and workers needed protein to carry them through the day. Eggs, of course, were a cheap source of protein which is why they became a breakfast staple. In one of the earliest known cookbooks (1669) poached eggs are recommended. It's a short article and worth reading.

I forgot to mention, talking of crab menus the other day, I checked in our supermarket and found they

do have cans of crab meat. Fairly large and something like $32 each. I did NOT buy one. They also have frozen crab legs too which I knew about. Once in a blue moon, but it has to be very blue, I treat myself to crab legs - Matt can't be bothered with them I'm pleased to say.  Incredible really, he loves seafood but can't be bothered to shell shrimp or crab or even clams and oysters. A friend in the States had a shrimp boat and every so often we would have a feast of back fin crabs in their back yard (as well as shrimp) and most of us would tuck in with gusto, not Matt. I don't remember now, but they must have had other stuff to eat. I used to peel him some shrimp on these occasions, but not the crab, if he can't be bothered to fiddle with them, and they are a fiddle to eat, he can go without. Oysters we used to buy - a bushel at a time - and Matt had built a small fire in the back yard especially for steaming them. We put them on a tin base and covered them with wet sacking. They would open themselves and I would feast on them. Matt used to take some and cook them in a sauce. He never really enjoyed clams an oysters after we had way too many clams one time and were cooking them every which way we could think of - in chowders, steamed, fried, you name it. Must have been half a dozen of us stuffing our faces on that occasion. None of the rest of us got tired of them, but Matt never ate clams again after that.

I absolutely love this kind of Vietnamese Soup. I'm sure I have some Oriental blood in me somewhere. This was posted by Bon Appétit. Kombu is a delicious seaweed. We used it when we were making sushi and the recipe said remove it. I left it in it was so tasty.

Sticky rice is worth using for this porridge-y, comforting chicken soup recipe; it releases lots of creamy starches and helps builds nice body as it cooks. 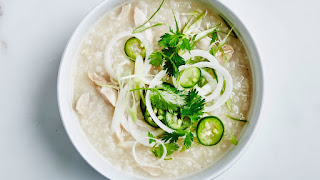 1. Bring chicken, kombu, ginger, star anise, cinnamon, cloves, stock, and 2 cups water to a simmer in a large pot over medium heat. Reduce heat to maintain a low simmer and cook until chicken is tender. Transfer chicken to a plate.

2. Strain broth through a fine-mesh sieve into a large bowl; discard solids. Return broth to pot and add rice, fish sauce, and palm sugar. Bring to a simmer and cook until rice is very tender, 18–20 minutes. Shred chicken and return to pot; season soup with more fish sauce.