Volcanoes, Reading, As We Know It. 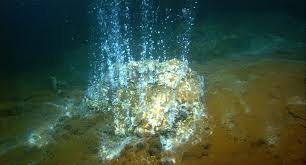 I can't help wondering how long we are going to survive. I keep seeing reports on TV shows about all the major volcanoes, or super volcanoes, which could erupt at any time and nobody knows when. If they do erupt, they will cause untold damage to the environment and the ash clouds will cause winter like conditions over large portions of the world. I learned of a new one near Santorini in the Med. Santorini itself is a volcano, but this one which is underwater is way more powerful and way more likely to blow apparently. To quote "Kolumbo is an active submarine volcano in the Aegean Sea, about 8 km northeast of Cape Kolumbo, Santorini island. The largest of a line of about twenty submarine volcanic cones 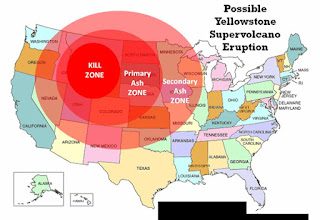 extending to the northeast from Santorini, it is about 3 km in diameter with a crater 1.5 km across."  I heard about this one in a TV programme on Sunday night. Then, of course, there is one in Yellowstone Park which is classified as a super volcano and would create untold devastation in the Americas. I just  found this map of the predicted Kill Zone for Yellowstone. I think I will move further east although my part of Canada is not in that area, It seems the effects will spread east anyway. And yet they figure life originated in the underwater hot water zones of volcanoes.

I have been reading a lot of Juliet Marillier lately. Particularly the Shadowfell trilogy which is, I think, classified as young adult. I don't fall into that category but I am really enjoying them. Then a friend, Carrie Butler, has just released a trailer of a book which will be coming in December. It is titled As We Know It. Looks like quite a story and the trailer is excellent, Carrie made it herself.

Deep beneath the ocean, stretching hundreds of miles alongside the Pacific Northwest coastline, lies the Cascadia subduction zone—a fault on the verge of unleashing a catastrophic earthquake, thirty times more powerful than the San Andreas. Unfortunately, like most tourists, Elena Cordova is oblivious.
She’s got her own pent-up stress to deal with, a humiliating breakup that’s driven her to end her tenure as a human doormat once and for all. So, when a pickpocket makes off with the last remnant of her relationship, she takes action—only to get trapped with him when disaster strikes.
Now, if either one hopes to survive, they’ll have to get past their initial impressions and work together . . . because in fifteen minutes, half the town will be underwater.
To read more go to Melissa  Maygrove's blog. If the book is as good as the trailer, it should be an awesome story.

You don't have to use wild mushrooms, of course, but if you can get chanterelles — oh man. It takes a bit of time at the stove, but when the quesadilla is done, you have a great handheld food that is, 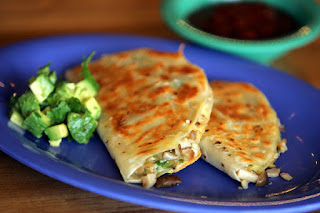 among other things, very kid friendly.

1. Place a medium sauté pan over medium-high heat and add 2 tablespoons vegetable oil. When oil shimmers, add mushrooms and a generous pinch of salt. Sauté until mushrooms release their liquid, liquid evaporates and mushrooms begin to brown, about 10 minutes.

2. Add onions. Sauté, adjusting heat as necessary, until onions are soft and entire mixture is golden brown but not burned, about 5 minutes. Remove from heat and allow to cool slightly.

3. Using a food processor or a knife, finely chop mushroom-onion mixture, then transfer to a large bowl. Add grated cheeses, cilantro, oregano and coriander. Season to taste with salt and pepper.

4. Place a large nonstick or well-seasoned skillet over medium heat, and add remaining 2 tablespoons vegetable oil. While pan heats, place a large spoonful of mushroom-cheese mixture into center of a tortilla, and fold tortilla in half to make a half-moon. Place filled tortilla in preheated skillet and cook, turning once, until tortilla is nicely browned on both sides and cheese is melted. Repeat to make 8 filled tortillas. Serve immediately.

Email ThisBlogThis!Share to TwitterShare to FacebookShare to Pinterest
Labels: As We Know It, Kolumbo, Shadowfell, Wild Mushroom Quesadillas, Yellowstone