Well carpet's in and it didn't take long plus I got the carpet layer to fix the carpet/wiring area between the kitchen and dining area. My ISP wouldn't touch it although their person laid it underneath the carpet when we first came here 15 or so years ago. It's been a potential tripping hazard since they re-did the wiring a few months ago.Then I showed our new neighbour where the exercise classes took place and afterwards in the mail I had my new copper infused socks in the mail. They actually came from China. Or mine did. If they do all they say they will, I shall be very pleased. Our neighbour helped restore the furniture to the bedroom although Matt had tried to do some of it on his own. I wish he would remember he is NOT 40 any more.

Later in the day I picked up my laptop and had no wifi. Then I went to use my tablet, guess what, no wifi there either. I got on the phone and told them I was absolutely sick of this. The tech I was talking to reckons he made adjustments to the modem his end and I won't have the problem again. However, I still have no wifi for my tablet. They say that is the tablet's fault. Yesterday it was my laptop's fault. Grrr. Crossing my fingers, at least I seem to have had wifi on my laptop ever since. But, boy am I teed off about this whole business.

Last but not least we received a nice cheque,  unexpected, from the Electric Membership Corporation from who we obtained our power in NC. They accumulated money in a membership account for the customers and have sent us dribs and drabs over the years as we are "retired members". The last couple of times were more than dribs and drabs though.

I had an email saying it was International Chocolate Day. When I googled, it seems to have actually been in September. I didn't even realise there was such a thing. I didn't celebrate it at the time, but being a chocoholic, I will certainly celebrate it now. 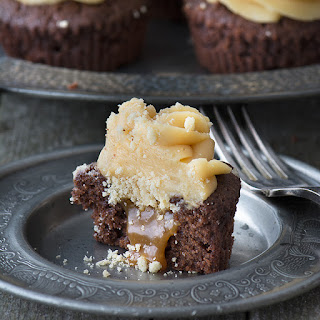 For the hidden centre

6. Divide the mixture evenly between the cupcake cases.

7. Put the tin in the oven and cook for 25-30 minutes until a skewer inserted in the middle comes out clean.

8. Once cooked, remove the cakes from the tin and leave to cool on a wire rack while you make the caramel buttercream.

12. Use a pestle and mortar or rolling pin to crush the shortbread biscuits.

13. Use a teaspoon to scoop out the centre of each cupcake.

14. Add 1tsp of caramel sauce and then 1 tsp of crushed shortbread into the centre of each cupcake.

15. Put the caramel buttercream into a piping bag fitted with a star nozzle and pipe the buttercream on top of each cupcake.

16. To finish sprinkle each cupcake with a little of the crushed shortbread.