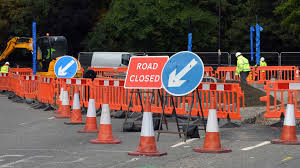 Much to my delight, I got a phone call today with an appointment to see the vascular surgeon in September, early September too, only trouble it is on a bowling day but not league bowling so I might as well accept it graciously. One big problem is that it is on one of our main streets which has been ripped up at the moment. It will be a couple of years before they have finished, at least, so that makes it difficult to get there. We can do so of course, but..... Everybody is cursing about it, but the city of Kitchener seem to have gone nuts lately with road works. Practically everywhere you go, you can't - well not directly anyway.

nobody came to lead us. One of the biggest classes we have had in a while too. I phoned to find out why and all I have got so far is an apology and saying someone was supposed to have been there. I am supposed to get a call from someone else but I suspect she is trying to find out just what happened.

It's been chucking it down today, Monday, we were getting somewhat dry here again, so it was not unwelcome. Got thunder but didn't see any lightning. Tuesday I have to go see my favourite, the dentist again. This could be my last visit for a while, I hope.

I love snow peas. Maybe it dates back to when I was around 15 and had to walk a fair distance to catch the bus to school, I along with many others, used to use the path through a field as it was quicker than going by road. They used to grow peas and I would pick the pods with under developed peas and eat them on my way. When I saw this dish, I knew I had to have this recipe. 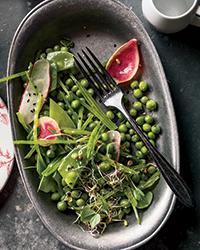 This bright, crunchy salad gets a hint of smoky sweetness from the maple syrup in the vinaigrette.