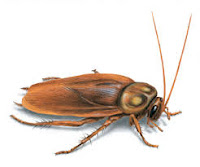 I can't remember who it was and I am too lazy to hunt for it, but one of the blogs I read started off a bit the same as me because she couldn't think of anything to write and mentioned Cockroaches. Having lived in the south for a while, I am very familiar with the dear little insects. Used to encounter them in the Mediterranean too. My parents lived on a boat and I would fly out to join them in the Med wherever they happened to be at the time. My mother, knowing me, used to do her damndest to make sure I didn't encounter any roaches, but despite her best efforts, there was always an odd one or two wandered in my direction. My father figured they came on board with the vegetables from the markets. In public my mother, along with everyone else we knew at the time, pretended they never saw cockroaches in their home. At one time they had a cat on board and it would hunt around the quays and catch enormous cockroaches, and I do mean enormous, then, in the way of cats, it would bring the things on board and play with them. Inevitably the bugs would escape the cat and scurry for a hiding place on the boat. Yuk.

parents later lived for a few years, we were shown what happened by the hotel barman. He shut down the bar and closed the shutters. Then after a short wait, he opened everything up and turned on the lights. The cockroaches were scurrying in every direction. Enough to put me off drinking, well almost.

Living in North Carolina it was a constant fight to ensure they didn't enter our home. Some people didn't seem to bother too much. I always remember one friend coming to visit us in Canada before we lived in NC and saying that when he got home, the roaches met him at the door dancing up and down and saying "goody goody, daddy's home". Since moving back to Canada, we have stayed in a cottage in NC a few times and they spray regularly and do try to keep them down. However, if one mentions the bugs or complains, they assure you they aren't cockroaches but Palmetto Bugs. Eventually I looked them up and found in fact they were worse, flying roaches. Yuk and double yuk. As you can see, not a whole heap of difference. They really turn me off, revolting things. I once read that whatever happens on earth, they will be the survivors. 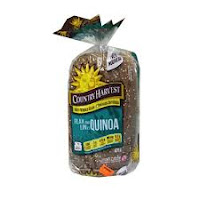 We had our bowling banquet on Wednesday - end of the summer season of bowling - and were served KFC. I haven't had Kentucky Fried in a long time. However, I ate one piece with the coating on, and removed it from my second piece. I do not like their sides, their fries weren't too bad but that green stuff which I think is their version of cole slaw, and the yellow stuff which, I think, is mac and cheese, doesn't appeal to me one bit. There were carrot sticks and celery, not sure where they came from, and a selection of breads, one of which looked particularly good. I asked what it was and found out it was flax and quinoa whole wheat bread. I thought it was delicious and on the way home, as we had to call in at the store, bought a loaf. Turns out it's pretty high calorie though.

Now, if, after reading about roaches, you want a recipe, here is a classic from the south. I didn't think much of grits until I came across this dish.

1. Cook bacon over medium-high heat until crisp. Add onion, thyme, mushrooms, and garlic; sauté 6 minutes or until onions and mushrooms are golden brown. Add 1 1/4 cups chicken stock, coffee, next 4 ingredients (through red pepper), and 1/8 teaspoon salt. Bring to a boil; reduce heat, and simmer 4 minutes. Add cornstarch, stirring with a whisk until smooth. Add shrimp; simmer 4 minutes or until shrimp are done.
2. Bring remaining 2 cups stock, remaining 1/8 teaspoon salt, and milk to a boil in a medium saucepan; add grits, stirring with a whisk. Reduce heat, and simmer 5 minutes, stirring frequently with a whisk.
3. Place 1/2 cup grits in each of 4 shallow bowls; top each serving with 1 cup shrimp mixture. Sprinkle each serving with 2 tablespoons tomato and about 1 tablespoon green onions.