Saturday night I watched American Sniper which I later found out won an Oscar for sound editing. I wonder why? I quite enjoyed the movie but would have enjoyed it a lot more if I had understood what people were saying. Maybe it was very realistic, but I did not know what they were saying. Of course the movie was littered with swear words just to add to the difficulties. Such a pity because it was a good story but although I stayed with it, nearly turned it off a couple of times, I found I was very disappointed. I was also distressed about the fact that he was shot by a veteran he was trying to help. I knew he had been killed, I didn't know by whom and how it happened. A tragedy to survive 4 tours in Iraq and then to end up being killed by a compatriot whom he was helping. He was apparently America's best sharpshooter with pinpoint accuracy. He had 160 verified kills to his name. He had a strong sense of responsibility to his brothers in the SEALS. Because of the sound, Matt didn't even watch it as he had trouble figuring out what was going on anyway. Not really surprising. Too much realism in a movie is not a good thing in my opinion when people cannot fathom out the gist of the film.

Late afternoon on Sunday it started clouding up. We ended up with a huge big black cloud hanging over us. I took 4 shots two of which don't show how dark the cloud was. Not a very good photographer. One you can see where it is raining in the distance. Then we got a thunderstorm and a half with lots and lots of rain. Matt says not enough to do any good because it wasn't very long, but the amount that came down in a steady downpour, I think it will have done good. 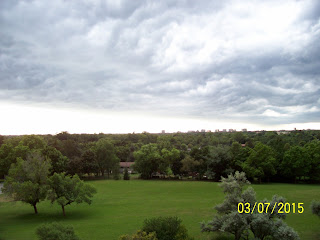 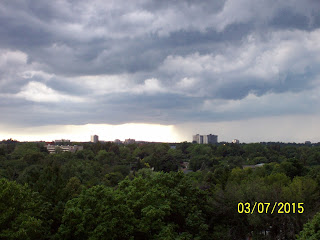 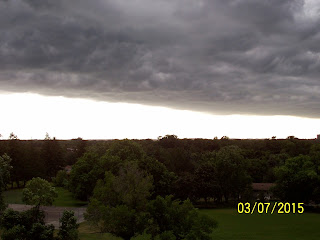 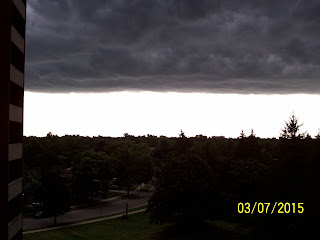 Believe it or not, but the clouds were all the same colour as the last picture.  However, I wanted to show you what it looked like. In the second picture you can see the rain to the left pouring down in the distance. In the last picture you can see the corner of our building. Actually it was so dark it made me think of tornadoes  As you can see in the first two pictures it was coming down pretty close to the ground but luckily there was no wind until it started with the rain, thunder and lightening. I was standing by the open window when one crack came down really close, made me jump out of my skin. Now everything is fresh and clean looking with blue skies. Amazing how fast it changes.

This is a vegetarian recipe from the New York Times. I thought it looked delicious and might please some of my vegetarian friends.


Getting this vegetable torte right takes a little time. You really must grill (or pan-grill) or roast all the 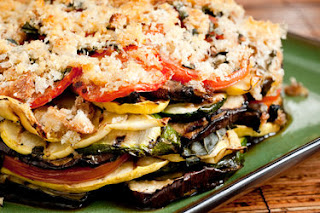 vegetables well — they have to become quite tender — before assembling the torte. Ultimately, you want the vegetables to almost melt together. Grilling is the technique of choice because it gives the vegetables a hint of smokiness.