HI had a bit of a scare on Friday. Around lunch time the doctor’s office

called me, a nurse I assume, to say that there was a problem with the blood work I had had done the other day and the doctor wanted me to go to a specialist for a second opinion. I put the phone down and then started to worry. What could be wrong? What could be the problem? Why didn’t they tell me? Matt decided we should head over to the doctor’s office right away and find out. Takes us a good half hour to get there and once we did I saw one of the receptionists who knows us very well, she told me that it wasn’t too serious but I had a lowering of kidney function (diabetes strikes again). They are sending me to a nephrologist (new word to me). I might say the receptionist was probably not really supposed to tell me all this. Anyway, the upshot, I didn’t need to see a doctor which I probably would have not been able to do anyway. But why don’t they tell you this stuff in the first place instead of scaring you. Lukemia came to my mind, particularly as I had recently been talking to a friend who has it. 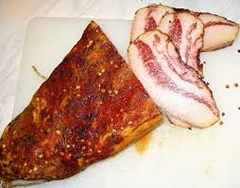 across it How to pronounce the 16 most confusing food words so naturally I had to check it. I don’t really know Sriracha but it turns out I was pronouncing it right. See it a lot in recipes all of a sudden. The only word I wasn’t pronouncing right was acai I was using a hard c although I think I had heard the proper way at some point in time. As for guanaciale when I read it I pronounced it correctly, but I have never heard of it before. I gather it’s a cured meat similar to prosciutto. It looks pretty fatty though, I wonder if its available here? All the others are mostly French and Italian names with one Greek and one Vietnamese thrown in. I knew how to pronounce Pho because a friend, who had been there, told me.

while. It has a large bouquet of flowers on the front which I laboriously applied some years ago. I used to pipe some gold or silver rubberised liquid all round which one had to let dry before using. No idea what it was called. I did a whole bunch of these things when I lived in NC. I also did a bunch of transfers which I made on the computer on special paper and then ironed on to various things, shirts, napkins, etc. I put poinsettia designs on a set of napkins for Christmas plus names on our chef’s jackets when we had a cooking business and so on. It suddenly occurred to me that I always deny that I do crafts but I guess these things do come under that heading. So yes, I do crafts.

I’m not a big fan of lasagne although in this part of the world, everybody has their own recipe which is made frequently. When I saw this, I thought it sounded sufficiently different to be interesting.

This unusual lasagna with portobello mushrooms, sweet onions, spinach and Gorgonzola cheese has a rich, complex flavor. It's also great with goat cheese instead of Gorgonzola, if you prefer.