For the very first time, since I began blogging several years ago, I decided to tak

e some time off. I have neither been writing nor reading.  I wrote one blog of course, about meeting Jeff and Diane last week. Both of them sent me pictures they had taken, as usual I had forgotten to take my camera. This is one Diane took of Jeff at the bowling alley. Because of my lack of camera, it is the only one I have of Jeff that day. He took several of Matt and I at the miniature golf site. 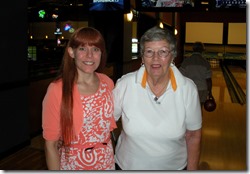 He also took the picture below on both his camera and Diane’s.  Not sure which this one is. Then one of me putting and Matt watching. As Jeff won, we were 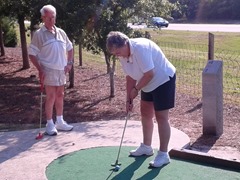 both left in the dust by the Dragon Knight. We played again a couple of days later and Matt won but I came a close second – I even got a hole in one!
We had a lovely day. We all wish it had been longer. Jeff is now back home and we have another week to go.

Yesterday was my birthday and much to my delight, we had found some champagne splits, because it came from Spain one is not really supposed to call it champagne. Sparkling wine or frequently described as methode champenoise. That apart, I was delighted to have some for a birthday drink, in my family it was always a tradition to drink champagne on our birthdays. As I am the only one who drinks it though, it isn’t worth buying a whole bottle. Not that I 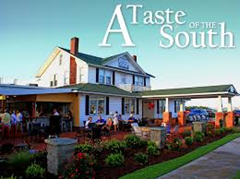 couldn’t drink it, but I probably wouldn’t be much use for the rest of the day LOL. We didn’t do a lot during the day, I rested a bit on the bed as I have been having swollen ankle trouble and the only place it goes down is in bed at night even though I keep my feet up a lot during the day. In the evening we went to Floyds 1921 restaurant in Morehead City where we met up with 5 of our friends for dinner. One friend had just been released from hospital that day, she said she was determined to make it to dinner.
I chose the High Cotton Crab Cakes over creamed spinach which came with a Tomato Crab Bisque first (could have had a salad). Matt chose the Shrimp and Grits and had Brunswick Stew as a starter. If you have Adobe here is a copy of their menu. I finished with a crème brulée made with blueberries and flavoured with lavender. It was delicious. They put a candle in it and everyone sang Happy Birthday, aaaaah. I was given some small token presies as well which were delightful to receive. Homemade jams, chocolates, soaps, etc.

Hallowe’en is on it’s way and I am beginning to see recipes. This one was on the page of our local radio station, same place where I have broadcast recipes before. 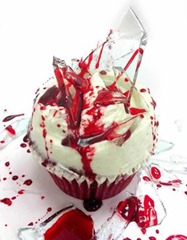 Bake according to box instructions. Let cool and frost cupcakes with white frosting.

Make the edible blood. Mix together 1/2 cup corn syrup and cornstarch in a large bowl. Slowly stir in the 1/4 cup of water, adding more if necessary, until the corn syrup mixture has thickened to the consistency of blood. Stir in the red and blue food coloring.

Stab each frosted cupcake with a few shards of broken sugar glass. Drizzle on drops of "blood" to complete the effect.