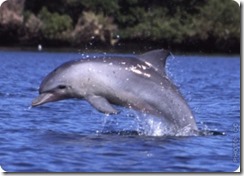 If a dolphin like this one becomes trapped in the killing cove, his fate is uncertain. He, along with countless others, including pilot whales, are at risk of suffering the cruellest of deaths, being slaughtered in what can only be described as a bloodbath. Please help urge officials to show the world they do not sanction cruelty, by ending this brutality.

This picture and text was taken from an appeal being sent to the Australian government. If you have ever seen the dreadful 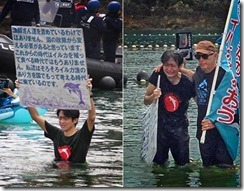 pictures of the blood red waters of the Taiji Bay where dolphins are caught in nets and then slaughtered, then do please sign the petition you could also sent the letter to your own government. Apparently if you stick your head under water in the bay you can hear the terrified animals screaming in fear. There is a picture on Facebook of a young Japanese protester crying his eyes out because of what he heard when he did duck his head into the water. These are virtually sentient animals being killed for food.
When you read today this I will be travelling. But I really wanted to spread this appeal and I hope some of you will spread it too, this slaughter so needs stopping. 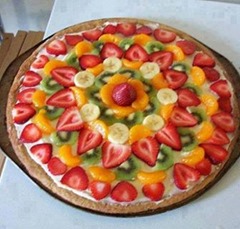 Preheat your oven to 350°. In a bowl, beat butter, sugar, and egg until fluffy. Add baking soda, cream of tartar, and flour. Mix until well combined. It should be the consistency of a soft cookie dough. Bake for 15 minutes. Allow to cool. In a separate mixing bowl, combine cream cheese, juice, honey, and cool whip. Mix until well combined and spread on cooled cookie crust.