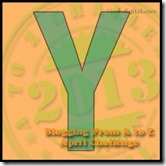 I have a personal grouse about yoghurt, it is very difficult for me to find plain, uns

weetened yoghurt. I first encountered yoghurt in the Mediterranean where I learned to eat it plain although lots of people in that area added honey, but I don’t like that, plain is good for me. Nowadays, everything possible is added to it and I just don’t enjoy it. I do use a vanilla yoghurt when I want to make yoghurt cheese (i.e. yoghurt drained in cheesecloth for several days), but normally I want plain. I found one I liked, probiotics and all, made by Danone in their Activia line and then our local grocery store stopped carrying it. Now if I want that particular brand I have to go to another grocery chain to get it which is a nuisance to say the least. I suppose it wasn’t selling well enough. My father’s answer to that was “well give me some of the ones that didn’t sell”.  I found a Wikipedia article on yoghurt which said that the Persians believed Abraham’s fecundity and longevity was due to his regular ingestion of yoghurt. It has been described as the food of the gods and has been eaten in India, Russia and the Mediterranean countries for thousands of years. No-one knows how it first came to be made (I believed it was just sour milk for many years) and it can be made with soy milk or sheep’s milk or just about any kind of milk product.

The Indians have certainly been eating yoghurt, which they call Raita, for a very long time and it is absolutely delicious served with curries, especially really hot ones.


Yogurt with Cucumber and Mint
Serving: 6 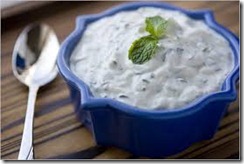