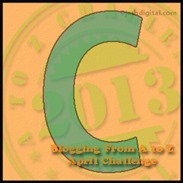 I am thrilled to bits, I finally reached 100 followers yesterday, thanks so much to all of you and especially to Al Diaz, Father Dragon, for being #100.

A lot of people don’t like Chihuahuas, but I think they are a great little dog. My mother had two of them both of the black and tan colouring, I don’t remember the name of one but the other was Henriquetta la Pequeña, or Quetta for short. They were both the bravest little dogs you can imagine and would stand up to dogs many times their size if necessary. They are also extremely intelligent animals. 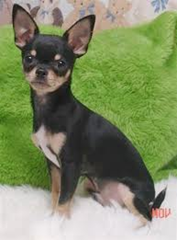 Apparently their origins are shrouded in mystery, although the favourite theory is that they were the dogs of the Toltecs: the current breed was discovered in Chihuahua, Mexico hence the name. They were used in religious ceremonies and were pets to the upper class. They were certainly great pets in my parent’s household and my mother took hers everywhere (she only had one at a time). In fact Quetta used to have a basket which she lay in on the bar in the yacht club whilst my German Shepherd lay on the floor below. They got on fine. I always remember Jayne Mansfield, an actress/singer trying to smuggle one into England in her purse. There was, maybe still is, a strict quarantine law in the UK and any dog entering the country had to spend time in a kennel until it was sure it didn’t have rabies. Jayne Mansfield tried to circumvent this law but got caught.

When we lived in North Carolina, Matt could walk out into the sound almost anywhere and rake up a mess of clams, we never had to buy canned clams of any kind. I would then cook them long enough that they would open up and virtually proceed as shown. We also used to add a can of corn and I ate one chowder in which the cook had added something spicy, not sure what, but it was delicious. If you get fresh clams, make sure they are the smaller ones, they call the big ones chowder clams but they can be very tough. 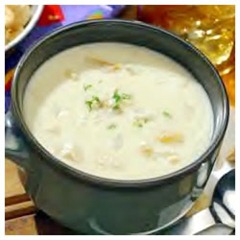 Directions:
Drain juice from clams into a large skillet over the onions, celery, potatoes and carrots. Add water to cover, and cook over medium heat until tender.
Meanwhile, in a large, heavy saucepan, melt the butter over medium heat. Whisk in flour until smooth. Whisk in cream and stir constantly until thick and smooth. Stir in vegetables and clam juice. Heat through, but do not boil.
Stir in clams just before serving. If they cook too much they get tough. When clams are heated through, stir in vinegar, and season with salt and pepper.