V is for Veal Escalopes With Ginger Wine, Nor’easter, Chocolate and Wine

If you live in this area of Canada, you may notice that winter has returned. Snow for goodness sakes. Luckily round here we really didn’t get much more than sleet, but it is cold enough to give a brass monkey some problems. Considering the lovely weather we had last month, it is a bit of a shock to the system. There was a nor’easter running up the east coast and some of its weather spread as far as Southern Ontario. They had snow in North Carolina which would normally be somewhat warm at this time of the year. Personally I don’t care what kind of precipitation we have, so long as we have some. We need rain – and not just for the asparagus!!! I remember one nor’easter when we were living in the Carolinas, we ended up with a huge tree lying across our back deck with the barbecue and a couple of chairs underneath it. Luckily it didn’t do much harm to the deck itself. Matt built well LOL.

We had  a very busy day. Matt had to be at the doctors early so off he went. He was lucky, 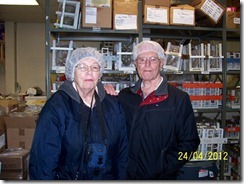 got in an out quickly. Then after lunch we headed for Reid Candy and Nut store. We were a bit disappointed as it turns out that they don’t temper and conche the chocolate themselves, they in fact buy it from a Pennsylvania company which has an outlet in Canada. The chocolate is made to a Swiss recipe they tell me, which is a good thing. I don’t think I ever went into their store before, it was a chocolate lovers paradise. We were taken out back and given nets to put over our heads (don’t we look cute). In the background you can see all kinds 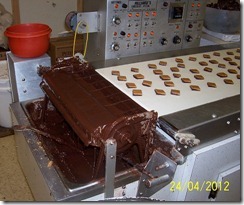 of Easter moulds which they have yet to clean and put away. They were running some candies which had to be chocolate coated. The fillings had been prepared in the morning, the first stage is to roll them over the molten chocolate which you see at the beginning, the conveyor is air conditioned so it chills quickly

. Then a machine which is behind glass feeds chocolate into another part of the conveyor where the top coat is poured onto the candy and again chilled. Looks a bit messy where the chocolate gets splashed up during the process. The finished chocolates then get marked with a simple pattern and are checked for holes at the same time. At the far end of the whole

process they are packed in boxes or a couple given to visitors to try. They were pretty good. However, that’s all they were doing today, they had two lots of filling plus a load of jelly fillings to be done. There was also a large slab of caramel chocolate just lying there (waiting to be cut perhaps) I could have done some damage to it. It looked rather lonely. Wandering round I saw some 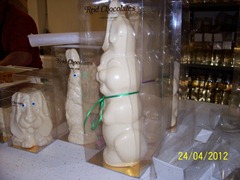 Easter bunnies which obviously were waiting to be reprocessed, all the Easter stuff gets melted down and used again. These were a creamy colour and I was told that white chocolate is very expensive so they use something different. I don’t think they were really into telling us all about it. We were given a sample of the chocolate and it tasted just like white chocolate to me, but not to them apparently. Guess who would have liked to take the big bunny 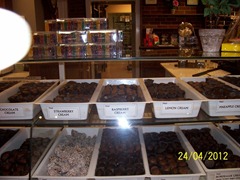 home? We then chatted to the staff for a while about chocolate production, one of the young women has been to several places where they actually do make the chocolate, she says you don’t see a whole lot, just a display of machinery. I took a couple of pictures in the store itself and then bought a box of chocolate roses, not quite as pretty as the one in my blog yesterday. They had some chocolate roses on sticks which were on sale for $1.80 eac

h. The last picture is the roses I bought for ourselves. They do them in different flavours, mint for one, and in their white chocolate too. They also sell a stack of dietetic chocolate which is very popular apparently, however, I decided to be bad and buy the real stuff. Later in the evening we tried them, deeelicious. The chocolate is so smooth and feels wonderful in the mouth.

as we had some time to kill before my internist appointment at 3:00 we went for a coffee. After that drove to the Magnotta wine store principally to pick up a bottle of Toro Nero which is a wine we both enjoy. Still having time to kill, we tasted a couple of wines they had available, one their Zinfandel which wasn’t bad, but there are others we prefer more. The other was a 2007 Cabernet Sauvignon Limited Edition VQA which was delicious and we ended up buying a bottle of it as well. We both found it a delightful wine so it has been added to our wine cooler.

Finally went to my internist and discovered I have an enlarged artery leading to my heart, didn’t know that before. I have to have another echocardiogram next Tuesday. I don’t like that, it hurts my chest and then I’m sore for days after. But I guess if it has to be done, it has to be done.

This is a recipe we have been making on and off for close to 40 years. It is delicious so long as you can get Stone’s Ginger Wine which is an English product. We can certainly buy it where I live, in fact I like it on a cold winter’s day mixed with Scotch when it becomes a Whisky Mac. 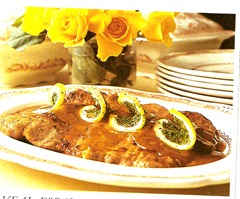 4 veal escalopes, each 1/4 inch thick and weighing about 3 ounces

GETTING READY
1) Cut fat off the escalopes and trim into shapes.
MAKING
2) Dust scallop lightly with the seasoned flour.
3) In a heavy-bottomed pan heat the butter and oil. Sauté veal till golden brown.
4) Place into serving dish and keep them warm.
5) Pour ginger wine to the pan. Boil scraping pan juices with a rubber spatula.
6) Decrease heat and simmer slowly for 5 minutes till wine is syrupy.
7) Add lemon juice and cream. Simmer for 2-3 minutes till sauce becomes pale coffee color.
8) Add salt and freshly ground pepper.
9) Pour sauce over the meat.
SERVING
10) Garnish each escalope with a lemon twist scattered with chopped parsley.