U is for Utan Binisaya and Ukranian Stew, Chocolate, Superstition, Prison? 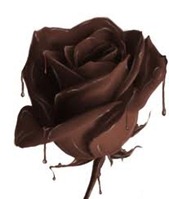 Nut Store in Cambridge. I am really looking forward to it. Telling a friend about it they said they had been to Hershey’s in the States, Pennsylvania. I think that would be an interesting visit. Of course if I had my druthers I would love to go to a Swiss chocolatier, like Lindt for instance. The Swiss are reckoned to be the best chocolatiers in the world although one process they use was actually invented by a Dutchman and then another by an Englishman: conching was invented by Rodolphe Lindt. Wikipedia on Chocolate is interesting to read. I don’t think I will be seeing anything as beautiful as this rose today though. Just as well, I would be scared to eat it, I am often reluctant to eat my Easter bunnies. I wonder why they didn’t remove the drips?

As I said, Matt has a doctor’s appointment early this morning in order to get a

prescription for foot nursing. It really is ridiculous, I have been going to the same foot nurse for years (diabetes) and they have all her information on my file. But they can’t use that, it has to be re-supplied along with a doctor’s scrip before they will give us anything towards the payment for his treatment. Insurance companies can be a pain in the you know what can’t they?

On Sunday I was thinking about superstitions, many of which were passed on to me by my mother and I still cling to, such as not cutting one’s nails on a Sunday ( Matt’s mother said Friday) and not walking under ladders. One of the oddest, to me, was in the North of England where the fisherman will not use the word pig, it has to be gissy. I have no idea why, just tried to find out but Google didn’t have the answer. There is an island called Pig Island which they renamed Gissy Island. If you break a mirror, that’s 7 year’s bad luck and so on and so on. Matt’s grandfather would not proceed to work if a black cat crossed his path and walking between two nuns was really bad luck. And what is it about Friday the 13th? I was also thinking there are not many things that can be said to bring you good luck, OK if you find a four leaf clover, who ever does, or carry a rabbit’s foot, poor rabbit. Do you have any particular superstitions which you cling to despite everything?

A friend sent me a series of pictures in an email. Here are a couple from the series. The

email carried a question, did one know what these pictures were? Eventually we were shown gymnasiums, sports rooms, leisure rooms and then bedrooms. Once Matt saw the bedroom, which to me looked like a 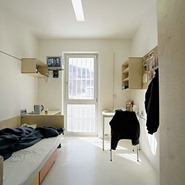 dorm room, he said “that’s a cell”, he was right. Does that look like a cell to you, I can see university students living in similar types of accommodation This is the most luxurious looking new prison which was recently built outside Toronto. Not only that, the prisoners get a choice of menu. The final comment in the email asks how one can get in there, shoot a politician maybe!!! I can believe recidivism would climb rapidly, many of the people who end up as prisoners don’t live so well outside on the street.

I have never heard of most of the ingredients in this Filipino soup recipe but as it fits the category I thought I would include it for a bit of fun. Of course if you have access to these ingredients, well and good. It looks as thought it would be very tasty.. 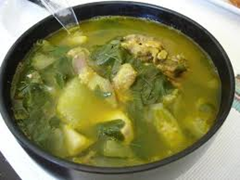 On the other hand we have this Ukranian dish which is a somewhat unusual combination of meat and fish in one dish but the ingredients are much more familiar. Couldn’t find a picture anywhere.

Put 1 qt of milk into a bowl and soak the herring in it 8-12 hours. Pat dry being sure to remove any and all bones. Fry the onions and garlic in 2 T of butter until golden. Pan fry the ground meats and place into a food processor. Add the onion, garlic herring, and potatoes. Chop until a smooth mixture is achieved. Stir in the yogurt and the egg yolks. Add the spices. Preheat the oven to 400° F. and butter a large baking dish. Add the shredded carrots at this point. Beat the egg whites until they are fairly stiff but not dry and then add to the mixture. Turn the mixture into the buttered baking dish. Sprinkle with the bread crumbs and goat cheese, dot with remaining butter, and then bake for 45 minutes. Serve hot.

Email ThisBlogThis!Share to TwitterShare to FacebookShare to Pinterest
Labels: chocolate, New Prison, Reid's, Superstition, U is for Utan Binisaya or Ukranian Stew