Melanoma, Apples, Pain in the Neck,

New skin cancer genes have been discovered in two different researches, one in Australia and one in the UK. You should read this, particularly if you are fair skinned caucasian. I was unaware that melanomas were more prevalent in fair skinned people. Maybe that’s why nature made races from high sun areas with black or brown skins so that they were less likely to have problems. 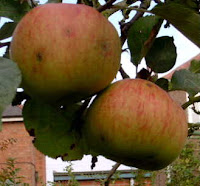 I just ate an apple (Golden Delicious), I really don’t

much like apples, some of the apples I could get in the UK – Cox’s Orange Pippin comes to mind – I quite enjoyed, but basically, apples leave me cold. As for putting them in a pie or making an apple crumble, no thanks very much. Especially as in North America what I call cooking apples (Bramley’s) are not available with the result that pies and crumbles are way too sweet for me. If I made an apple pie in the UK, I never put sugar in it anyway. Why did I just eat an apple you may ask, ‘cos they’re good for me. Of course, not having lived in the UK for a very long time, there may be all kinds of newer apples I know nothing about. I don’t know as much about English apples as Matt does anyway. Probably a sign of his mis-spent youth scrumping. Forgot, I certainly do not like cider. Yuk.
When we were in NC last month, we visited a friend

who was wearing a neck brace due to various operations she had had. I just thought “oh she’s wearing a brace” and that was it. My doctor has now recommended that I wear one for several hours a day to help with my spine problems from falling a while back. What a bloody pain. I am not convinced its doing anything anyway, but I only got it yesterday. If I wasn’t a touch typist I wouldn’t be able to type at all, even so its difficult.

Had a bit of a problem with the dash panel under the driver’s side of the dash, it kept falling down. Matt took it to a garage which used to be a GM dealer although now it is apparently Mitsubishi. They fixed the problem and then added a FREE complimentary hand wash before giving him back the car. Now that’s pretty incredible.

If its got chocolate in it, its got to be good, right? 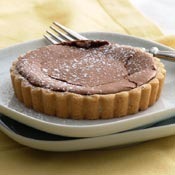 Cooking.com Tip: When melting the chocolate, be sure to set the metal mixing bowl firmly on the lip of the saucepan so no steam escapes but without resting the bowl in the water. Do not allow any of the steam to touch the chocolate when removing the bowl as water will make the chocolate seize.

DIRECTIONS
FOR THE CRUST:
Preheat oven to 350 degrees F. Blend all ingredients in a food processor just until dough forms. Transfer dough to work surface. Gather dough into ball. Cut dough into 8 equal pieces. Press 1 dough piece over bottom and up sides of each of eight 4 3/4 inch tartlet pans with 3/4-inch-high sides and removable bottoms, forming 1/4-inch-thick crusts. Pierce crusts with fork. Refrigerate until firm. Bake until crusts are pale golden, about 18 minutes. Cool in pans on rack.

DO-AHEAD TIP:
Can be made 1 week ahead. Freeze 1 hour. Cover and keep frozen.
Arrange tartlets on baking sheet. Bake until filling puffs and begins to crack, about 15 minutes for room temperature tartlets and 25 minutes for frozen tartlets. Place tartlets on plates and serve.