Forgot to mention that when we were driving to

Paris on Friday we were following a propane truck. The main part of the truck was white, but there were areas all round which were pink and carrying paintings of pink ribbons plus all kinds of support breast cancer research messages. I was pretty impressed. I found this picture, not the same truck of course, but it appears propane companies throughout North America are doing this. There were pictures of trucks from all over the place.

A story we heard the other day, an elderly couple (80’s) decided to get married, she was living in assisted housing for the elderly. He moved in and now the government say between them they earn too much money and have to move out. They have an income of the princely sum of $36,000 per annum. $22,000 is the minimum. She is considerably fragile and he says he will leave her if that’s what it takes. I can’t imagine why, at their ages, they didn’t just live together and none of this would have happened. I do sympathise with the problem, except one you have to except everyone, but…… she has lived there for 14 years.

Although this is, in fact, somewhat serious, I thought this was a funny article about penguins needing

sweaters to stop them preening. I guess its really the picture which is funny. A yarn store in New Zealand is asking for help for these penguins who have been caught in an oil spill until they are well enough to be scrubbed down. The story is spreading world wide. I first heard about it on Facebook.

I thought these looked different and sounded pretty tasty. I am not a big fan of Gruyère but Matt likes it. 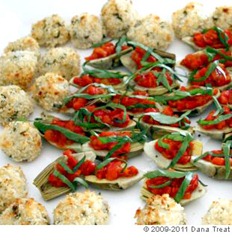 I could easily have eaten about half the rice balls on that platter – they were that good. I made them the night before and just let them rest in the refrigerator on a baking sheet. They tasted incredible just out of the oven but were still good after sitting out for an hour or so.

Adapted from Food and Wine

Preheat oven to 450°. Heat the olive oil in a medium saucepan. Add the shallot and garlic and cook over moderate heat until softened, about 4 minutes. Add the rice and cook, stirring for 30 seconds. Stir in the water and bring to a boil. Cover and simmer over moderately low heat, stirring occasionally, until the water has been completely absorbed, about 10 minutes. Scrape the rice into a bowl and let cool to room temperature.

Stir the Gruyère, 1/4 cup of the Parmesan and all the chopped herbs into the rice.

Season the rice with salt and pepper.

In a medium stainless steel bowl, beat the egg whites with a pinch of salt until firm peaks form. Stir one-fourth of the whites into the rice to loosen the mixture, then stir in the remaining whites. Roll the rice into 1 1/2 inch balls. (Periodically wetting your hands will keep the rice from sticking to you and will allow you to make more compact rice balls.)