The potluck on Saturday evening was very successful. There was a ton of food it would have stunned our sinlaw once again. The main meat was a ham, but there were cabbage rolls and meatballs and someone had brought shrimp - probably other things I didn't see. Then there were jellied salads, pea salads, bean salads, rice salads, plus vegetable casseroles of several kinds and scalloped potatoes and a dozen more such dishes. The table was just groaning with food. Then there were the desserts. There was a huge sheet cake, a trifle, my Turkish Orange Cake, tarts, fruit cups, etc. etc. To drink we had egg nog or coffee. I don't think anyone went away hungry. I also think there must have been a stack of food left over. I should have taken my camera. One friend really like my dessert, she ate two pieces and wants the recipe so she can make it for next weekend. At the potluck I talked to the Super's sister-in-law about the break in on her

car, there was $2,700 worth of damage apparently. Two cars had been broken into on the same day in our underground garage. Matt thinks it was an inside job. One doesn't like to believe that. Incredibly the cars were quite close to the entry from the building, amazing that no-one saw anything. Both cars were Chrysler's and that is a popular model with car thieves we hear. Or maybe they are easier to break into. In the days when we parked outside, our Buick was broken into and the ignition was broken, guess they were trying to start the car. We also had a sleeve with change for tolls and meters which they took.

Yesterday there was a report that in Edmonton, Alberta they had had a temperature of -46°C and that had nothing to do with wind chills, that was the actual temperature. It was a record and one that I personally would hate to have been involved with, that is bloody cold. There is a story on the net of a man returning from 3 weeks in Mexico dressed in shorts, he said the tan fell right off him!!
I enjoyed the eggnog on Saturday night so thought I would share this 'safe' recipe with you. Of course you can buy eggnog in the stores these days, but it is always satisfying to make things yourself. As usual this recipe comes from Eating Well
Eggnog
From EatingWell: November/December 1998
Not kid stuff: A sophisticated and safe low-fat version of classic eggnog. 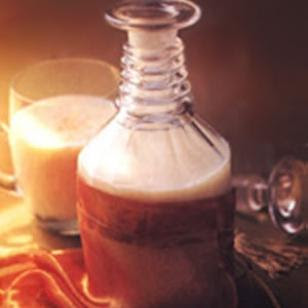 1.Bring milk and nutmeg to a simmer in a heavy medium saucepan over low heat, stirring occasionally.
2.Whisk eggs, sugar, flour and salt in a large bowl until smooth. Whisking constantly, gradually add hot milk; return mixture to saucepan.
3.Cook the eggnog over very low heat, stirring constantly, until thick enough to coat the back of the spoon, 10 to 15 minutes. (Temperature must reach 160°F; do not let eggnog come to a simmer.) Remove from the heat and pour through a fine-meshed sieve into a bowl.
4.Whisk in brandy (or bourbon or rum) and vanilla. Place a piece of plastic wrap directly on the surface of the eggnog and refrigerate until chilled, for at least 8 hours or overnight. 5.Just before serving, add cream to eggnog. Ladle into cups and serve garnished with more grated nutmeg.
Tips & Notes •Make Ahead Tip: The eggnog will keep, covered, in the refrigerator for up to 2 days. •Tip: Use a nutmeg grater or the tiniest holes of a box grater to grate whole nutmeg.

Have a great day
Jo