I've been meaning to mention the colours around here. They are absolutely beautiful this year. All around us we are driving through avenues of golden trees with the leaves on the ground carpeting the roads and grass with gold as well, it is the prettiest sight. My camera is not good enough to do it all justice unfortunately, but this is an idea of what it looks like. Although we have more golden in the streets at the moment. Outside the local library, they have 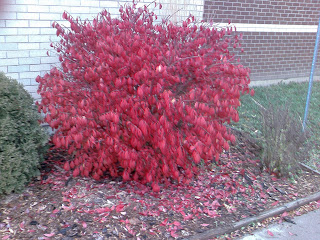 three bushes which turn a fiery red. I tried to take a picture but unfortunately they look almost pink - this was taken on my mini camera which I carry in my purse all the time. Doesn't really do it justice. It was funny, whilst I was taking this picture, a mother walked by with her littlie and on seeing me taking pictures, the littlie wanted a picture taken too - I 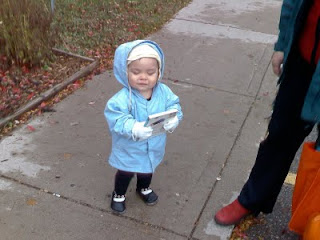 obliged. Matt took the picture I printed back to the library in the hopes that the mother or someone will recognise the youngster and she can get the picture. Its nice to see someone so young with a book. The librarians recognised the child and will pass the picture on to the mother.

here, you may remember I wrote to them about disinfectant wipes for cart handles. They basically said their health department had looked into this and had decided the disinfectant was unhealthy to ingest and that very young children riding in the carts have been known to chew on the handles. Also adults could touch the disinfected handles and then their mouths. I don't know - personally I would prefer disinfectant to someone else's germs, wouldn't you?

Today is the first of our monthly Travel Leagues with Seniors 5-pin bowling. We will be going to New Hamburg where we join some of the other bowlers for lunch and then go bowling for fun. Once upon a time there were several alleys involved and we travelled to a different one every month, but now everyone seems to have dropped out except for two alleys and a team from an alley that no longer exists. We have fun though. We also get donuts!!!

The following recipe came from a recent Eating Well newsletter. A reader had written to suggest serving this with wholewheat pasta and fresh spinach thrown in with the shrimp. Thought I would pass that on for what its worth.

Lemon-Garlic Marinated Shrimp
From EatingWell: December 2006
Marinating precooked shrimp in garlic- and lemon-infused oil is a simple yet elegant appetizer. 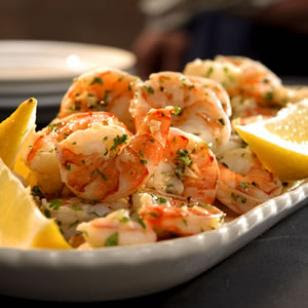 Tips & Notes * Make Ahead Tip: Cover and refrigerate for up to 2 hours.