Travelling to Cambridge yesterday, we crossed a couple of small river tributaries and noticed that they are somewhat swollen, in fact a few people had water covering a large part of their yards. There has been a heck of a lot of snow melt in the last day or two together with some rain which doesn't help when it comes to flooding. There are large puddles in the fields as well as at the local airport. Hopefully it won't get any worse. Cambridge itself is right on the Grand river which has been known to flood a few times. Like I said in the comments yesterday, humans are the ones who are daft enough to build their homes in the wrong spots, be it flood planes or the sides of volcanoes. A friend of mine has a house on the edge of the Intercontinental Waterway in NC which gets flooded regularly when hurricanes drop by. Luckily her house is on stilts so her main living area is fine. Have you heard about the plane which apparently dropped out of the sky 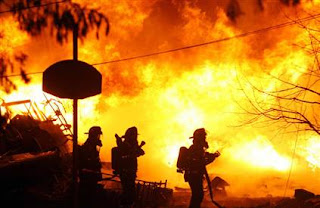 last night in the Buffalo area? One minute Traffic Control were talking to them and the next, silence. 49 passengers and crew were killed together with one person on the ground in the house the plane dived into. Thank God the plane came down vertically and didn't plough through several houses. There is a lot on the news today, but at the moment they have no idea what happened. The picture shows the burning at the crash site. Incredibly two people escaped from the house. My sympathies to all the families.

Yesterday I went to see the surgeon about my hip and he says the situation hasn't got any worse since last time he saw me. He has sent me for a bone scan which will be in March. I had to go for an X-ray first and took the CD of the X-ray results in to the surgeon. He then gave me the CD which I looked at on my PC and lo and behold I can look at my hip bones. Ain't technology wonderful? I asked him whether he preferred the old or the new system, he said in one respect it made it a lot easier for him as the labs could just email him the scans. Also it is cheaper for labs to make a CD which costs 1¢ as opposed to making films which cost more. On the other hand, he figured the clarity of the films is much better. Anyway, unless the bone scan shows anything different, I don't need to go for surgery at the moment unless the pain becomes unbearable. The hip bone is connected to the thigh bone, the thigh bone is................... I made myself a salad yesterday for lunch which was so good for me I

should be the healthiest person in the world. It had some avocado which is recommended for many things including heart health, a few walnuts, good for lowering cholesterol, some fresh ginger thought to be good for heart health amongst other things such as the knitting of bones, not to mention the usual salad ingredients. They believe turmeric may have some heart benefits too but its not yet proven so I left that out. Cinnamon is supposed to be good for lowering blood sugar, but I took the recommended amount of that every day for months and it didn't seem to do anything for me at all. They are now saying avocados are good for weight loss whereas at one time, the opposite was said. Difficult to keep up isn't it? I love avocados anyway, so it doesn't take a lot to persuade me to eat them. Funnily enough I have never made Guacamole which is the way so many people over here eat avocado. I enjoy it too so not sure why I have never made it. Mind you, we don't really eat Mexican food so that is probably why. Having said that, I had to find a recipe for Guacamole didn't I? Guacamole Source: Cooking Nook.com

This is a wonderful, easy guacamole recipe. I have added garlic, because I find it really zings up the flavor.

Guacamole is a very healthy recipe. Although we tend to think of avocados as high calorie, they are extremely healthy for us. The garlic and citrus juice are also very healthy foods. This recipe is so delicious and so easy to make. It's not only a great dip recipe on it's own, but is also perfect served alongside many other Mexican dishes like Nachos or Quesadillas.

Cut avocado into large chunks and mash coarsely in a bowl with a fork.

Add remaining ingredients and blend gently. The guacamole does not have to be absolutely smooth. Leaving a few small chunks is fine and some people prefer it that way.

Taste and adjust the seasoning by adding more pepper sauce if you wish. Have a great day and don't forget Valentine's tomorrow.
Posted by Jo at 9:00 AM