At 7:00 a.m. on Friday, in Ontario, we will be able to see the Opening Ceremonies in Beijing. We are told they are going to be splendiferous. I plan to be watching them. I imagine most of the actual games will be recorded by the time we get to see it although I remember sitting up til 3 a.m. when I lived in the UK to see events being broadcast from Japan. I hope their beefed up security is going to be sufficient. The happenings just the other day are enough to make one nervous.

I see also, China has told Bush to keep his nose out of other country's affairs. Interesting. I wonder how much notice he will take of that. On record he doesn't seem to think it applies to him. Sorry, my American readers, I am not in any way politically minded, but I do NOT like Bush. I can't wait until November to see who next you are going to inflict on the world. The French believe Obama is going to win the election, I am told the French are never wrong. Later in the day on Friday I am doing my first stint at the Canadian Diabetes Foundation. Not sure what I will be doing, probably mostly orientation. So I am writing this blog on Thursday evening as I won't have a lot of time tomorrow. I had an email from Eating Well today and they are giving lots of tomato recipes. As tomatoes are one of my favourites, along with asparagus of course, I thought I would share some of them with you. Tomato, Tuna and Tarragon Salad 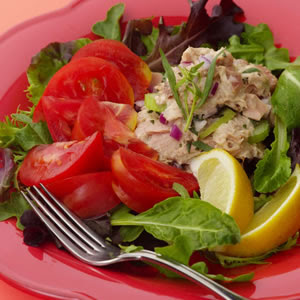 MAKE AHEAD TIP: Store in an airtight container in the refrigerator for up to 1 day. Have a great day.
Posted by Jo at 7:00 AM