Today genuinely is Canada Day - when we were out and about yesterday, there were lots of places open and we got a newspaper delivered. Not so today. There will be several organised fireworks displays this evening, one of the biggest locally will be in Victoria Park which we can just see some of from our balcony. Another closer to us will be at Bingeman's which is a fun park and camping site. That, unfortunately, is the other side of our building, so we can't see it. It looks like its going to be a nice day for all the barbecues and other celebrations.

Yesterday was a very sad day for me, I went to Barrie's Asparagus and

bought my last bunch of the season. I told Tim Barrie I was crying but he didn't believe me. Well I am inside. I now have to wait a whole year to get more fresh local asparagus. A whole year!!! I know, some of you are probably sick of my fixation on the vegetable and all the asparagus recipes I have been posting, but to quote a well known chef writer, its my blog and I will post them if I want.

I have been told of a strawberry farm not too far away, so I want to check it out, they are

supposed to have very sweet berries. I am also awaiting locally grown tomatoes and corn. There is another farm I want to check out for tomatoes. I got hold of a list/map which I am using to find these places. So far I haven't found a place with really, really good tomatoes yet. Hopefully this year I will do so. I have told Tim Barrie that I will let him know if I do find really good tomatoes. He doesn't much like them so I feel he should at least try a top notch tomato if I can find some. The trouble is, just because they look pretty and round and red, doesn't mean they have any flavour worth speaking about. I do so miss the one's we used to pick ourselves in North Carolina, they were some of the best we have ever eaten. Unfortunately our favourite farm stopped growing them. 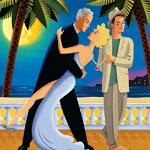 Tomorrow I am off to one of the local theatres, this time in St. Jacobs which is a nearby town notable for its Mennonite population and its quaintness. Also for an excellent restaurant called Benjamin's and its farmer's market. We shall be seeing Dirty Rotten Scoundrels - they made a movie of it - the show has had very good reviews from both friends and the local radio stations. Matt is not going, I am going with a friend. Matt figured he had seen the movie why would he want to see this performance. We will be going to the matinée.

On the way home from the asparagus farm we called in at Costco which is a large wholesale store, if you are unfamiliar with them, we got some nice chump lamb chops. Not cheap in this part of the world because not many Canadians eat lamb, at least that's what I am told is the reason lamb is not cheap. We had them grilled with asparagus and half a baked potato each which made a good meal. We actually bought baking potatoes for Saturday's dinner and had a couple left over. For some reason over here they are always wrapped in foil and most people don't eat the skins. I always take off the foil, give the potatoes a good scrub and then cook them in a very hot oven having salted the wet skins before I do so. The skin is always delicious, besides which, it contains all the nutrients that a potato carries.

when you scoop out the cooked potato and mix it with cheese and butter and then put it back in the skin. For best results if you sprinkle the top of the potato with more cheese and brown it under the grill it will look golden and delicious. Nowadays people stuff potatoes with all kinds of fillings, but I personally prefer the simple cheese filling for myself. There used to be a chain in the UK called Spud-U-Like or something similar, don't know if they still exist, where you could find all kinds of different stuffed potatoes.

Speaking of tomatoes, here is a recipe I saved but haven't yet tried. I got it from Recipe du Jour which is one of the ezines I get in my inbox most days.

Mix chives, cornflour and sugar with seasonings to taste

Brush edges of pie lightly with water. Use remaining pastry sheet to cover the pie sealing the edges. Trim pastry edge and flute. Brush the pie with a little beaten egg and bake for 40-45 ­minutes, until golden brown.

Happy Canada Day and everyone have a great day.
Posted by Jo at 8:45 AM