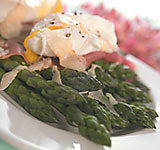 Last night we tried Asparagus in Bed and were both somewhat disappointed. I didn't like the prosciutto with it and Matt said the dish was generally not as good as it appeared from reading the recipe. However, Hrugaar tells me the dish Asparagus and Tomato Bake that I posted on June 13, was good so I will try that next. One thing I learned from the Asparagus in Bed recipe was how to "hold" poached eggs in water until I wanted to use them in the dish. I had never tried this 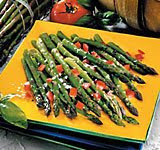 before. I thought the combination of eggs, Parmesan and asparagus was very good but found the prosciutto made it too salt, for my taste anyway.

here to be anything like the one's we used to get in the Europe years ago. They are not as sweet. The best berries we ever tasted in North America were those we bought at a particular farm in North Carolina, just outside Morehead City. Now they were sweet. I don't think I will be posting lots of recipes for strawberries because basically I like mine 'au naturel' with good cream. I frequently serve them with the Double Devon cream which can be bought in glass jars here. Of course we usually have to sweeten them. The classic dish in North America is Strawberry Shortcake; shh, don't tell anyone, I hate it. Our new Superintendent's wife was telling me, yesterday, she likes strawberry and rhubarb pie which I have never eaten, but the season is so short, I like mine just plain. Rather like lobster, I get it so rarely, I don't want to "muck about" with it. I wanted to try a berry farm which is a fair distance from us, but Matt is beginning to complain about the gas costs to get there. We have been spending a fair bit on gas to get to Tim Barrie's for asparagus and the berry farm I found is even further away.

If you read the comments, Hrugaar said they spend £40 to fill up a small car with gasoline, well, being a Limey he said petrol as I would have done til I emigrated. That, my friends, is close to $90 and that is for, what I have no doubt, is a 4 cyl. vehicle. We are complaining bitterly over here, but Europeans are saying its about time we caught up with them. I do hope you read

Elizabeth Moon's letter to her congressman, I feel she really hits the nail on the head. This morning the Americans are talking about offshore drilling in areas which have previously been protected. I don't want to go back to a horse and buggy, but that's really where we should be headed. I commented to Matt, the other day, that I bet the Mennonites and Amish are laughing at our gasoline problems. Let's face it, with a horse, its grass and oats in one end and fertilizer out of the other. Very economical. Yes I know, you need stabling and field space etc. but once you have all that, you don't have to keep buying it. Wherever the expression originated, the oil producers have certainly got us over a barrel at the moment. I know I am oversimplifying, but it is certainly something to think about.

as the bowling alley will be filled with youngsters. We could just bank our scores for a previous game, but its more fun to actually bowl them. We have a couple of dinner parties coming up, one at a friend's and another one here. I am thinking of doing the Phyllo Bundles again as we enjoyed them so much last time. I need to check our guests like asparagus, surprisingly there are people who don't. As you can imagine, I can't understand that.

I was just thinking about a recipe when I remembered there is one recipe made with strawberries, which I love, Strawberries Romanoff. Here is a recipe from the internet with a little bit of history:


When he was the chef at the Carlton Hotel in London, Escoffier created Strawberries Americaine Style — strawberries in orange liqueur, blended into whipped cream and softened ice cream. Little did he know that it would one day be the star dessert of every posh dining spot in California. "Prince" Mike Romanoff "borrowed" the recipe and gave it a new moniker. Soon it was the hottest item on the West Coast. The L.A. Biltmore called it "Strawberries Biltmore." The Palace Hotel in San Francisco served it with anisette and maraschino.

2 pints strawberries, washed and stemmed
1/4 cup sugar
1/4 cup orange liqueur, such as Grand Marnier or Cointreau
1 pint vanilla ice cream
1 cup heavy cream
1. Slice the strawberries. In a large bowl, toss three-quarters of them with the sugar and orange liqueur. Refrigerate at least 1 hour to macerate.

2. Put the ice cream in the refrigerator to soften.

3. Put the cream and half the macerated strawberries in a cold mixing bowl. With an electric mixer, whip to soft peaks, about 12 minutes. Fold in the ice cream.

4. Distribute the cream among 6 chilled bowls. Mix the plain sliced berries with the remaining macerated berries and place on top of the cream.