So Bill Gates is, to all intents and purposes, retiring, he wants to concentrate on charitable work. With $58 billion I guess he doesn't have to worry too much about his pensions. I am not sure though why the primary target for his charity is outside his home in underdeveloped countries when there are so many deserving poor in the States. People tend to think of the US as a wealthy country, but when you get idiots spending billions on wars, it doesn't help those who are sleeping on the streets, or schools which have to close down due to lack of funds. Whilst looking for this picture I saw a heading "the man who made it cool to be a geek" which I thought quite funny, I should be such a geek. I remember the first Windows, I hated it, I much preferred DOS. Windows was full of silly doors and windows which you had to click on to get anywhere, I resisted using it for a long time. Yes, it does just show you how far I go back.

There were some interesting pictures of polar bears on Good Morning America today. There is a

new video clip which you can find here in fact if you check on the right, there is more than one video clip about them. The man who was making the film said they are very playful and would try and play tag with him whilst he was filming them. It is such a shame that because of global warming we are losing this wonderful bear. In the clip they say there used to be 1,200 bears in the Churchill, Manitoba area, now it is in the 900s. In fact they said they feel like historians recording scenes our descendants will never be able to witness. I often feel sorry that I won't be around to see some of the things of the future, space travel and the like, but when I hear about the loss of such wonderful creatures, I am not so sorry after all.

I've said it before and no doubt I will say it again, I do not understand American politics. Now Obama and Hillary Clinton are running mates. Having spent months and millions battling one another, they have now come together "for the good of the party". Hah! I personally will just be glad when November comes and the election is over and done with, then we can have a bit of peace for a while until they start campaigning again, which, I assure you, doesn't take long. You might wonder, if you don't live here, why I complain so much, unfortunately a lot of our news comes from the States so we see all this campaigning all flaming year or however long it is. Why they can't hold an election like Canada or the UK and get it all over and done with in a few weeks, I'm damned if I know. Now we get pictures of them being all palsy walsy with big toothy grins on their faces. Grrrrr.

and he has a lot of new pictures posted, including some painted in quite a different way from his normal paintings which are usually very detailed. It is interesting to read what he has to say as well as to see his latest "looser" paintings. We love Mike's artwork but we are somewhat biased I know. He makes, what to me are, very mundane birds, look like something really special. I know he spends hours at the weekends and on vacations observing birds, sketching them in situ and taking pictures. So do click on the link and at least have a look at "What's New".

As I mentioned, we have friends joining us for dinner tonight and as I have also told you, we are doing the Asparagus Phyllo Bundles, the Greek Chicken with Capers and Raisins in Feta Sauce I posted the other day, followed by Minted Chocolate Freeze. We will be serving a Pinot Grigio - I think the one from Malivoire which we visited a couple of months ago. 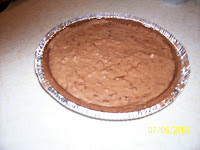