H is for Honey 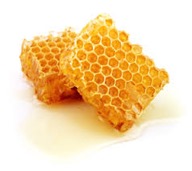 Honey is pretty incredible stuff. It is one of the few (if not the only) foods that doesn’t spoil. It is another thing I buy at Barrie’s Asparagus farm as they have a source from a local apiary. It is delicious honey and for me, having diabetes, it is wonderful for a quick sugar lift if and when necessary. I wish I could carry it with me but I have to rely on gummy bears or something then. Honey is made by honey bees and other less well 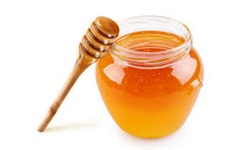 known bees as well as honey wasps.  We only eat honey bee honey though.They collect the nectar from flowers and turn it into honey By a process of regurgitating and evaporation then storing it wax honeycombs for storage. Although it doesn’t spoil, it is not recommended for infants as it does sometimes contain a bacterium  Clostridium botulinum which can be dangerous to them. It has a long history and has been used for flavourings, making alcohol, and has a role in religion and symbolism. It’s flavours can differ depending on the bees’ source of nectar. One of the oldest drinks in the world is Mead or Honey Wine and if you are ambitious, you can Google recipes to make it. Apparently it has become a lot more popular since A Game of Thrones. I also read an article which I researched about crystallised honey. I knew there was nothing wrong with such honey, but was unaware that it was due to storage in cool temps. In fact crystallised honey is delicious on all kinds of things such as toast, muffins, oatmeal, rhubarb. You name it.  Only the pure honey bought from apiaries will crystallise as it is in it’s natural state and has not been processed in any way.

Here is an easier drink recipe using honey. Pale Ale is made in the States. 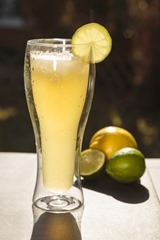 In a blender, combine honey, lemon and lime juice; process for about 30 seconds. Using a fine food rasp, grate ginger and add to blender with half the water; process for about 30 seconds. Pour contents from blender into a large mason jar with remaining water, stirring to mix, and place in fridge to chill.
To Assemble:
Pour half of beer into a tall chilled glass. Fill to top with chilled Honey Lime Ginger Lemonade. Garnish with a lime wheel and serve.