Well, Monday has been all about snow. It has snowed almost constantly all day and as far as I know, it is still doing so this evening. We also expect more tomorrow. When it was snowing really hard Matt said there was no way we would be going bowling, however, watching such traffic as there was outside, they seemed to be progressing well and we are on a bus route which helps. I did NOT see any snow ploughs however, no idea what happened to those. Maybe too busy keeping the express roads clear. One of our team told me that she would not be coming bowling, I had guessed that because I know she doesn't like to
drive in snow, but apparently another member had told her he wouldn't be coming either!! I was surprised as he drives an SUV. In the end, having asked the bowling alley what the main road outside their door was like, we decided to go as the snow had eased off. The roads were snowy, but it wasn't that bad so long as one took it carefully. Of course there were idiots out there driving too fast and who wouldn't have been able to stop if they needed to. There were quite a lot of people at the bowling alley, more than we had expected. I bowled, not very well, but... Only  thing is my back decided to play up instead so having only just about crept over the 100 points for the first two games, I ended up with a 140 game. Maybe I was thinking too much about what ached and not worrying about bowling.

I just pinched this from another blog, Viveka's My Guilty Pleasures,


“Snow is like sex,
you never know how many inches you’re going to get
or how long it will last”
Unknown 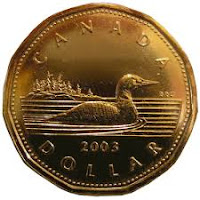 Kind of listening to the TV, they are talking about low gas prices today (Monday) - we noticed on the way past that our local gas prices were 88¢ a litre. That, for us, is fantastic although I understand the economy is suffering from the low gas prices per barrel. I must admit I am not up on such economics, but this is what is reported on the news. Luckily we have no plans to travel anywhere so the low dollar doesn't affect us. But the loonie (as we call our dollar) is certainly taking a beating at the moment. In case you don't realise, the bird on the back is a Loon. Of course this situation doesn't help food prices and our weekly expenditure on groceries has gone up a bundle. Like the $7 cauliflower for instance. Trouble is, not a lot of veg can be grown here in the winter, anything that is would have to be in greenhouses, so most of our stuff is imported from Mexico or the southern States. I bet when gas prices go up again though, the food prices won't come down. Funny how it happens that way!!

I liked the sound of this although I  have never eaten papaya.


Green Papaya Salad with Tomatoes and Basil
Food and Wine

Chef Lee Anne Wong loves the crunch of green papayas, an ingredient that's abundant in Hawaii. She spikes her healthy salad with green beans, grape tomatoes and plenty of herbs. 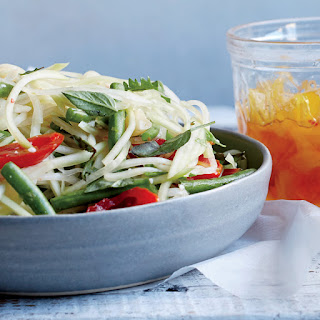 
HOW TO MAKE THIS RECIPE
Preheat the oven to 350°F. In a pie plate, toast the nuts until golden, about 10 minutes. Let cool, then coarsely chop.
In a food processor, combine the chiles, garlic, lime zest and juice, fish sauce, honey and salt. Purée until smooth.
In a medium bowl, toss the papaya with the green beans, tomatoes, basil and cilantro. Add the vinaigrette and toss again. Fold in the nuts and serve.