I finally phone the orthopaedic surgeon and it turns out he is retiring this year and is booked right through until then. Damn. I had a lot of faith in him as he had done both Matt's replacements as well as mine. However, his secretary, who knows me very well, recommended a new young surgeon who has moved into the area. So I phoned my family doctor, unable to get through, so I then faxed them but haven't heard anything in return. Not only that, I saw my doc on Thursday evening, but the secretary at the surgeon's office said she had not had a referral. I am beginning to think that going back to the group in the next town would be a good idea as getting a response is so difficult. Mind you, my hip has been heaps better anyway although my back has been worrying me and nothing is underway for that. Now I need to concentrate on hip and lower back exercises if I don't want to end up as a cripple.

I know, some things I spell the English way and some the American way. Most of the time I no longer know the difference unless, like now, a word is underlined by the system as I type (referring to orthopaedic). Sorry, doesn't look right to me without the dipthong. If I go to England they think I sound Canadian (or more likely American, we don't know the difference in sound) but in Canada they think I sound English. Unless you come here as a very young child I don't think you ever lose your original accent. I don't think I have ever heard a Scot who didn't sound like a Scot. In my young days we were always told that the right way to speak was as heard on the BBC. However, that doesn't apply any more as no matter where you come from in the UK you are not expected to change they way you speak to be on the radio. With the result that all kinds of grammatical mistakes are creeping into the English language, and maybe creeping is understating it.

I love leeks and frequently use them instead of onions or even as well as. I also like to braise them. This recipe caught my eye, it is, supposedly a French recipe

Whole leeks roasted in the oven reveal a deep, soulful side of their character. They're charred on the outside and soft and tender on the inside, and we'll finish them with a vinaigrette and fresh 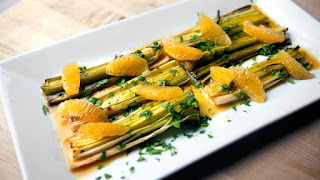 For the leeks:
Heat oven to 375 F. Trim the root ends, then remove the green tops and any tough, damaged outer fronds. Cut the leeks in half lengthwise and rinse in cool water to remove the sandy soil they grow in. Pat dry and place on a roasting pan cut side up. Drizzle olive oil over the leeks, season with salt and pepper and roast until tender, 15-20 minutes.
For the vinaigrette:
In a saucepan, add orange juice, red pepper flakes, and garlic. Bring to a boil, then lower to a simmer until liquid is reduced by half, 5 minutes. Finish making the vinaigrette by removing the garlic from the reduced orange juice and whisking in vinegar, then olive oil.
Assemble the dish:
Arrange the leeks on a serving platter, drizzle several tablespoons of the vinaigrette (reserving the rest for another use), and garnish with cilantro and orange segments. Season to taste with salt and pepper.