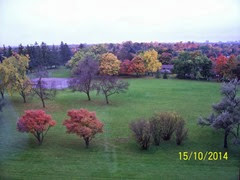 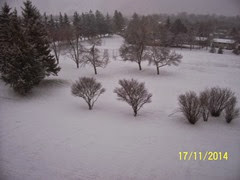 all, this picture is the park yesterday morning. You can’t tell but it was actually snowing when I took the picture.


Over the weekend we have been hearing a lot of accusations about Bill Cosby and rape or sexual molestation. I really don’t believe it because people in his profession get women throwing themselves at them so why the devil would he need to rape anyone. I think this woman is after money or notoriety.

Yesterday I was talking about a possible movie about the sci fi author Isaac Asmimov. He was also a scientist in his own right. Then I heard on Good Morning America that there are two more interesting movies in the works. One about Stephen Hawking the fantastic theoretical physicist and cosmologist called The

Theory of Everything which is a look at the relationship between he and his wife, and another about Alan Turing who is considered the father of computers. This one is called The Imitation Game. Based on the real life story of legendary cryptanalyst Alan Turing, the film portrays the nail-biting race against time by Turing and his brilliant team of code-breakers at Britain's top-secret Government Code and Cypher School at Bletchley Park, during the darkest days of World War II.  (IMDb).

This is what we had for supper on Saturday night, first time I have made this particular recipe and it was very good. A lot of people don’t like Gordon Ramsey because of his TV programmes and use of strong language. Matt derides him as a soccer player (which he once was) not a chef, no matter what, he comes up with some fabulous recipes and I use several of them. He runs successful restaurants in the UK and I wish I could eat there. Not my picture by the way, much as I enjoy French Fries, I rarely eat them.

A good steak doesn't want too much messing about with, so follow this easy recipe and enjoys yours with a rich shallot sauce. 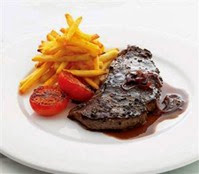 1. Melt the butter in a large frying pan over a medium heat. Add the shallots and cook for 2-3 minutes, to soften. Pour in the Cognac, boil for 1 minute, then add the wine. Increase the heat and boil for a few minutes to reduce by half.
2. Meanwhile, make up the stock and pour in. Boil until reduced by half again. Stir in the butter, season to taste, and leave over a low heat.
3. Meanwhile, brush a griddle or frying pan with a little oil and place over a high heat. Press the peppercorns all over the steaks. Place in the hot pan and cook for 2-5 minutes each side, depending how you like them cooked. Remove from the pan and set aside for 2 minutes to rest.
4. Divide between plates. Pour over the sauce and serve with thin-cut oven chips and grilled vine tomatoes.