I have always loved Spanish Tortillas, they are so very different to anything served on this side of the pond. This is Mario Batali’s version which I found in Food and Wine.

Tortilla española exists in almost every corner of Spain: as a tapa in fancy city restaurants; as a filling for bocadillos (sandwiches) at gas-station cafés; as a main course served on worn metal plates in home kitchens. Mario Batali's version, based on one he tasted in the Ribera del Duero wine region, is baked until golden brown and offers an especially high ratio of potatoes to eggs. 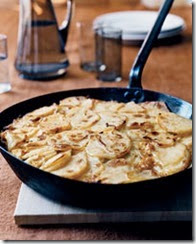 Make Ahead The tortilla can stand at room temperature for 3 hours before serving.

Across Spain, white wines are undergoing a renaissance, with better bottlings being produced from nearly every region. For this classic tapa, pour a white with substance, for instance a white Rioja with a touch of oak.