The main headlines at the moment seem to be about President Obama's Health reforms and the protests all over the States. He has also stated it will not be like the Canadian system. I know the Canadian system has a few wait time kinks (like my appointment to see a specialist next March), but generally its not a bad system. A lot of Americans seem to think the government would interfere between them and their doctors, this is not what happens in social medicine but it does mean if you can't afford a doctor its OK you still get treatment. I know people in the States who have lifelong debts because of medical treatments in hospital as they didn't have insurance. When we lived there, we gave up paying insurance premiums as it was so very expensive and even if we had had to call on it, we would still have ended up owing thousands due to a deductible of $2,500 to begin with. I feel much more secure being in Canada or the UK so that I know I can get emergency, or any other kind of treatment without breaking my bank. I see Palin is saying the Health Care reform is Evil!!! She being the one who quits her job and doesn't see it through to the end. If you are an American and don't support Health Care reform, I personally think you are nuts. Let's face it, I lived there 12 years and was always nervous in case I/we needed major health care. OK for those who have insurance at work, but there are thousands to whom this doesn't apply. Because of all the anger being stirred up, there are fears for Obama's safety 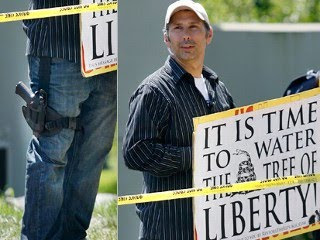 due to extreme groups who are taking advantage of the situation. There is an article and video on this page. Unfortunately there are many people in the States who are very unhappy with Obama's skin colour in the first place and will push the present situation into a crisis to justify their own feelings. You will notice in the picture, the protester is carrying a gun. I think Obama is very brave travelling around the country fighting for this in view of the reaction it is provoking.

Today we are cooking, friends coming over for dinner tonight. So pretty busy as you can imagine. Matt has a London Broil marinading at the moment, no that is the US version of London Broil, which is a 3 or 4 lb hunk of beef as I explained the other day. I last published this recipe in 2007, actually I see I published a whole string of recipes that day. November 16th if you are interested.

Mix up marinade. Marinate meat for several hours, minimum 8 hours, the longer the better, store in fridge and turn frequently. The picture shows one marinating. Light barbecue and get it good and hot then reduce heat to medium to cook. Suggest you remain with meat initially to reduce flare ups. Give it 10 mins on the first side, baste and then turn , then 5 a side until you have cooked for a total of 25 mins.

THINK PINK - do not overcook

Let the meat stand 10 - 15 mins before carving. Carve at a bias across the grain, not straight up and down. Carving at a bias is very important, nor should you carve the meat too thick or it will seem too tough to eat. We cook it on an indoor/outdoor grill as being in an apartment building, we are unable to have a barbecue.