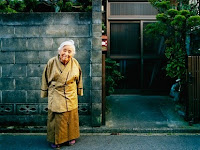 On Good Morning America today there was a very interesting article by an author and explorer on extending one's life. There is apparently another programme later in the week about the same thing. He was talking about all the different areas of the world where they do have long life spans and why this appears to be so. If you are interested click here to read a synopsis of the article. He calls the areas where people live longer "Blue Zones" and there is, of course, a book to go with it. One of the Zones is Okinawa, Japan, where this picture was taken. They live longer because it is important to them to have a sense of purpose. It doesn't necessarily include a whole country or area, Loma Linda, California, is a Blue Zone and yet it doesn't apply to California in general. I found it all pretty interesting and worth taking a look at. I will try and take in the programme later in the week.

The difficulty is, when one gets older, so do all one's friends and we spend forever talking about health problems which really are self absorbing although not of such great interest to others. We have younger friends too who are beginning to get into the aches and pains part of life, distressing really. I suppose we shouldn't focus on them. There are at least a couple of women I have met bowling lately who are 94 and 82 and seem to be in the prime of life. The 94 yr. old, I am told by her daughters, bowls twice a week, goes line dancing and plays table tennis. Not sure I could cope with that at my age let alone 94. She is a tiny little woman too and yet fit, healthy and vibrantly alive. So if you are young and fit, beware of losing that healthiness and do everything you can to combat it, this does not necessarily include hours in the gym each week. Short and frequent exercising is better than a long session in the gym apparently. Less sitting on the couch watching TV, or in front of a computer (guilty).

Oops, I have just discovered pressing return in the wrong spot publishes one's blog. Will have to be careful. 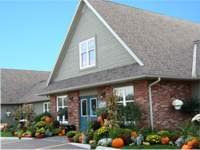 On Thursday we are going on our Travel League Bowling, this is when members from different bowling alleys get together once a month at a different alley each time - we will be meeting a bunch of friends at The Crossroads restaurant for lunch before we bowl. We have been there once before for lunch although the others have been several times. If you'd like to read about the restaurant click here and you can see their menus and buffet offerings. It is all homestyle food and their home made baking is pretty well known in the area.

Friday I go for a refresher at Let It Heal which will be great. More and more people are going there on my recommendation. If you have pain, go for Bowen Treatment, I can highly recommend it.

The following recipe is one we have enjoyed several times over the years, so I am sharing it with you now.