I am sorry, I totally forgot about blogging so I decided to repost one of my earliest blogs from 2007.

Talking about Iota yesterday and Thames Barges in general, I recalled a funny story about how little water they needed to float. A skipper and a young boy were working the barge, it was the youngster's first trip. Because the wind was in the wrong direction, they had to tack the barge upriver (tacking is zig zagging to catch the wind). In the youngster's opinion they were getting awfully close to the shore and he mentioned it to the skipper. "Be them seagulls swimming or walking?" said the skipper, "swimming" was the reply. "OK we carry on". Few minutes later the same discussion took place and the answer was still the same. After this happening again, the boy was getting frantic, once more he nagged at the skipper who said "Be them seagulls swimming or walking?" they boy checked and replied "walking". "OK" said the skipper "come about". (turn round).

I was also remembering the first time we went to Holland. We went into a cafe for tea and as this was just after the war, I was staggered to see cream cakes and chocolate cakes and all kinds of rich foods, we were still on rationing in England. I remembered I ordered a chocolate cone which was filled with cream. I called it a

chocolate marlin spike http://en.wikipedia.org/wiki/Marlinspike which was a tool I was very familiar with. I think we all stuffed ourselves stupid that day. Another occasion with Iota, we were returning to our berth in Oar Creek, Kent and had to turn the barge round. Unfortunately the tide was falling and we got the barge stuck across the creek. The bow was on one mud bank and the stern on the other with a big gap underneath the middle. All the local "old boys" saw this and prophesied Iota would break her back. I think my father took the opportunity to scrape off a few barnacles. I am sure he was worried sick though. However, several hours later, the tide came in again, we finished turning her round and moored her properly. No damage done. Talk about luck.The "old boys" included three who worked at a local ship yard (just a small place in those days) and they were so skilled they could use an adze to shave wood. There were two of them around 75-80 and the third, whom they called the Young'un was about 60.

Eventually, after living on Iota for about 8 years, and having moved back to Hoo, 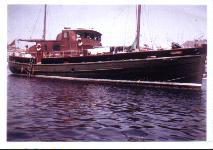 Kent, my father sold her and bought another boat. The Sunfish. She was a converted fishing boat or an MFV. I don't think she was ever used as a fishing vessel, but she was used as a mine sweeper during the war. She was mostly powered by engine although she did have small sails. That boat would go anywhere in anything. We rode out a force 8 gale in the North Sea once, bloody uncomfortable for the passengers, but the boat was quite happy. To "ride out" a gale, you put one sail one way and the other sail the other way and hope you don't move very far. When you are being tossed about in a gale like that, cooking is not too easy. We had a big 4 oven Aga Cooker in the galley (kitchen) and we used to put a pot of Storm Nosh on it. This was made by tossing in cans of beef stew, cans of veg, cans of soup and lots of curry powder. It was very satisfying and easy to eat and also, surprisingly enough, tasted pretty good.

One time we were in bad weather like that, someone who was crewing with us, had brought a huge catering sized can of corned beef. My father and a couple of the other men on board had opened the can and made sandwiches. They then brought the rest of the corned beef up to the deck house just below the wheel house (they were steering the ship from the wheel house) in case they got hungry again. I was lying down in the deck house feeling somewhat queasy, and remember that corned beef sliding from side to sideas the boat tossed around (there were fiddles which are small railings put round tables or other flat surfaces to stop things sliding off in a storm) and slapping up against one of the ship's radios. Must have been difficult to clean that up. Yes, I did get seasick, although eventually I learned to tell myself the trip was only so many hours long so it wasn't worth being ill. Originally I was one of the people who was afraid they were going to die and then afraid they weren't. A number of years later, my parents took in my three orphaned cousins who were pretty young at the time. Because they had no conception of controlling where and when they were ill, my mother conceived the great idea of tying sand buckets (small ones used at the beach) round their necks – it worked brilliantly.

I wasn't frantically keen on the sailing part, but loved it when we got where we were going. We used to go to France a lot, Belgium a lot, my dad was a member of the North Sea Yacht Club in Ostend as we went there so often. Holland, Germany, Denmark and Norway were all on our itinerary. I mentioned yesterday that my father was a good cook, this is one of his recipes. I don't know where it came from, too many years ago to find out. This was my father’s recipe.

Soft fry onions and garlic in oil, add paprika, puree, tomatoes. Thicken with cornstarch and then reduce with red wine. Add cayenne to taste and mace. Simmer sauce for about an hour until all well blended to form a puree. Place fillets in greased baking dish.
Sprinkle with vinegar and seasoning. Cover with greased waxed paper. Poach for
approximately 20 mins at 425 F Fry bread crisp in olive oil, serve fish on top covered with sauce. 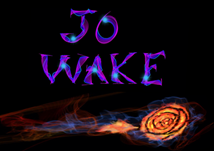