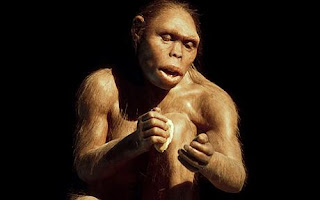 If you follow this link http://tinyurl.com/yfhlok5 there is an interesting article about what African scientists have been working on and will shortly be revealing. This has been very hush hush, but someone seems to have got hold of the story. A fascinating look into human ancestry and our journey from ape to human. A 2 million year old skeleton of a child has enabled the scientists to fill in many of the gaps in our current knowledge which at the moment is very scanty when it comes to the transition period of humans from the ape. In the picture is homo habilis which is presumed to follow the period of the child they have discovered. I was horrified to hear of a Chinese tanker which is aground on the Great Bar 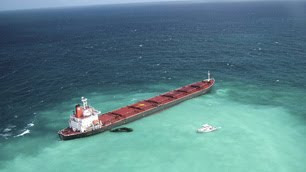 rier Reef in Australia http://tinyurl.com/ye8vmoj which is one of the world's great ecologies. This largest coral reef is a World Heritage site - a very delicate eco system and this tanker is leaking oil into the waters; in fact there are fears that the ship will break up and leak much more oil into the area which, by the way, is restricted to shipping, so how did the tanker get there in the first place? Ecologists are angry that pilots were not used to steer ships well away from such areas but up til now it has been considered unnecessary. If you look at this picture, you can see the oil leaking. The tanker is actually carrying coal which will do some damage, but not as much as the oil. Another news repo 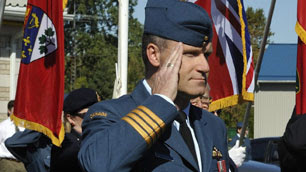 rt, a Canadian Colonel who is accused of murdering two women attempted to commit suicide by swallowing a cardboard toilet roll stuffed with foil in an attempt to suffocate himself. He had previously jammed the lock on his cell door with cardboard and foil plus writing a suicide note in mustard!! This story has shocked Canadians considerably to discover a man who was in charge of a base and a respected military officer has been charged with murder. It would appear the attempt at suicide confirms the accusations. He is now on suicide watch and it is feared he may not make it to his next court appearance.
I forgot to tell you that Easter dinner went very well although I cooked the roast lamb a tad more than we like. It was still delicious though and our guest certainly enjoyed her meal. The picture in the following recipe appealed to me when I saw it, I think I will shortly be trying it.
Garden-Fresh Farfalle Pasta and Chicken Kraft Kitchens 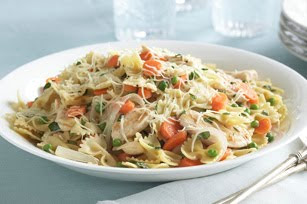 COOK pasta as directed on package, adding carrots and peas to boiling water the last 3 min. MEANWHILE, cook and stir chicken in large nonstick skillet 3 to 4 min. or until no longer pink. Remove from skillet; cover to keep warm. Add onions and dressing to skillet; cook 5 min. or until onions are crisp-tender, stirring frequently. Return chicken to skillet. Stir in broth. Bring to boil; simmer on medium-low heat 3 min. or until chicken is done, stirring occasionally. DRAIN pasta mixture. Add to skillet with basil; stir. Serve topped with cheese.