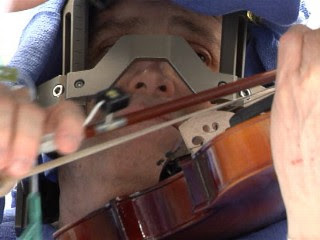 An incredible story on Good Morning America yesterday, a professional violinist, Roger Frisch played his violin for the surgeons whilst they operated on his brain. In fact, Frisch had been suffering from essential tremors which made violin playing impossible so the surgeons needed to see what happened when they stimulated different parts of his brain. Once they were satisfied they planted an electrode in his brain which will send out stimulating signals and allow him to resume his concert career. If you want to read the story follow this link. http://abcnews.go.com/WN/WorldNews/cutting-edge-treating-tremors-deep-brain-stimulation/story?id=10138705&page=1 There are several videos about the operation too. This was of particular interest to us because of the tremors Matt has been suffering from. No-one really knows what causes them, they just happen two or three times, disappear and then come back again several weeks later.
On GMA weekend, they feature various areas of the States and one picture wh 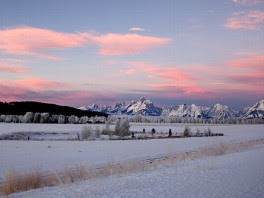 ich really captured me was the one of Grand Teton National Park, the sunset on the snow was so beautiful. North America as a whole has such beautiful areas. If you live in a town, you tend to forget although we are lucky overlooking a park and we see some gorgeous sunsets and sunrises, but we don't have any mountains in this area and they make a scene so majestic. Of course, now we don't have any snow left although there are murmurs of snow this evening, I really hope not. Talking of snow and weather, we have been having very warm temperatures lately hitting double digits regularly this week. This morning there was a news report of people having to be rescued from a lake because they had been ice sailing. Surprise, surprise, the ice wasn't thick enough any more. In fact I am surprised it has been thick enough at all this winter. Then another report of more snow mobilers being killed in an avalanche in the back country of B.C. Don't they read reports, do they think it can't happen to them? What is the matter with people? There have been several people killed already in avalanches in B.C. this winter and notices are posted about unsafe conditions. Not only do these people kill themselves but cause danger to other people who have to go and try a rescue.
There

is now a new medical condition, text rage!!! A youngster beat a girl he didn't know, almost to death because of something she texted. The story was, his girlfriend didn't have a cell phone so he texted her best friend, said best friend didn't approve of the relationship and made some comments I gather so he went and found her to - in his words - kill her. According to a psychologist this kind of thing is happening because people are no longer in contact f2f which apparently he said would diffuse the situation. I don't pretend to understand it all, but it seems to me all wrong the way people live these days constantly texting rather than actually communing with one another.

Mother's Day is coming up fast in this part of the world, and Emeril Lagasse is planning his breakfast in bed for some lucky lady. One has to send in entries explaining why your mom should qualify. So, Emeril was on GMA weekend this morning cooking breakfast - this is one of the recipes he prepared today, I thought they looked pretty good. Biscuits are very similar to scones as served in England. 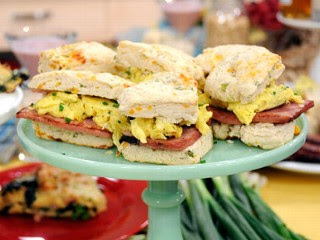 For the ham:
8 2-ounce slices honey baked ham 4 teaspoons butter Cooking Directions Preheat the oven to 425 degrees F. In a large mixing bowl add the flour and the butter. Using your fingers, a pastry blender or two forks, cut the butter into the flour until the mixture resembles coarse meal. Add the buttermilk and mix gently just until it comes together into a dough. Turn the dough out onto a lightly floured cutting board and knead for 1 minute. Roll the dough out to ½ inch thickness, using your hands form the dough into a rectangle. Sprinkle the dough with the cheddar cheese, scallions and black pepper. Fold the dough into thirds just like a letter. Roll the dough out to ½ inch thickness and fold into thirds again. Gently roll the dough into a rectangle and, using a sharp knife, cut into 8 equal size square biscuits. Place the biscuits on a baking sheet; brush the tops of the biscuits with the remaining 2 tablespoons of buttermilk. Transfer the biscuits to the oven and bake until puffed and golden brown on top, about 12 minutes. While the biscuits are baking, prepare the scrambled eggs by whisking together the eggs, whole milk, chopped chives, salt and pepper. Heat a large nonstick skillet over medium heat. When hot, add the butter. Swirl the butter around the pan and then add the eggs. Cook, stirring with a wooden spoon, until the eggs are soft and creamy and just set in large curds, 1 1/2 minutes for soft scrambled to 2 minutes for a hard scramble. Remove from the heat. Heat a griddle pan or large skillet over medium high heat and add 2 teaspoons of the butter. Once the pan is hot and the butter has melted, add 4 slices of ham to the pan and cook for 1 ½ minutes per side, or until the ham is a golden brown. Remove the ham from the pan, fold into quarters and repeat with the remaining ham slices. Split the biscuits in half and place on a large serving platter. Spoon the egg mixture onto the bottom portions of the biscuits, top with a slice of ham, and arrange the tops to make sandwiches. Serve immediately. Yield: 8 breakfast "sandwiches"
Have a great day