For some reason, You Tube won't let me embed the video this morning, but to hear an incredible voice go to Susan Boyle- Karen Miller (Karen's Musings) published this link yesterday and we heard Susan Boyle on Good Morning America the same day. Simon Cowell liked her as did everyone else. Hope you enjoy it. I love the song anyway, its from Les Mis it was sung by Fantine in case you had trouble remembering, we did. Susan Boyle was interviewed on GMA today, she is now at home in Scotland and is on top of the world at the moment I think.

There has been a lot on the news lately about the Obama's new dog, Bo, the 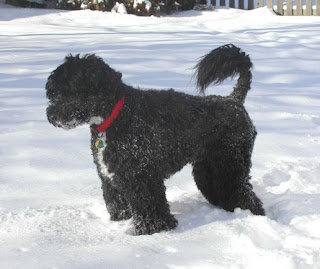 Portuguese Water Dog, who, they said this morning, can't swim. Isn't it automatic with dogs, especially water dogs. Although admittedly I had one dog who would NOT go near water, not sure what she would have done if she had been thrown in. This picture is not of Bo but the same breed. The puppy was given to the Obamas by Ted Kennedy who has a couple of them. At $2,000 a pup, I don't suppose the breed will be over popular. At least I hope not. I saw pictures of Mr. Obama and his girls running around with the dog yesterday morning. Bo does look a nice dog.

We went for our lunch at Cora's click here to see their menu, and were delightfully surprised at the restaurant. Matt and I both had the Panini Crepe with Ham, Pear and Brie, it came with a bowl of soup or a glass of tomato juice. I was then tempted by a mini Banana Blast, as a dessert. I have always loved crepes anyway. There are no piles of fries or lots of hamburgers. The meals come with salads and or fruit and are light and healthy. We were in Cambridge to see our doctor and mentioned Cora's to her, she has been there several times and thinks it is a very healthy place to eat. Certainly a very tasty place. Our friends told us they had first come across a Cora's out east; we don't appear to have one in Kitchener.

This recipe came from Eating Well again. I love Bouillabaisse and this somewhat different version appealed to me. It looks delicious in the picture. Thai Bouillabaisse

This flavorful seafood soup combines elements of the famous French bouillabaisse with the distinct Thai flavors of lemongrass, lime, ginger and hot chiles. Use two chile peppers if you like heat. Be sure to simmer, not boil, the soup or the seafood will be overcooked. Serve with a crusty whole-grain baguette to soak up the broth. Makes 8 servings, about 1 1/4 cups each 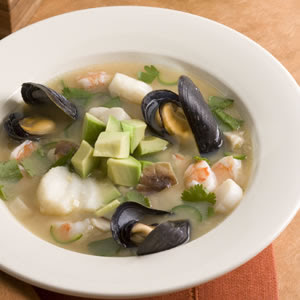 Tips Ingredient notes: Lemongrass is an aromatic tropical grass used to add a pungent, lemony flavor to Asian dishes. It is available fresh at large supermarkets and Asian groceries. Shrimp is usually sold by the number needed to make one pound. For example, "21-25 count" means there will be 21 to 25 shrimp in a pound. Size names, such as "large" or "extra large" are not standardized. In recipes calling for a specific count, order by the count (or number) per pound to be sure you're getting the size you want. To peel shrimp, grasp the legs and hold onto the tail while you twist off the shell. Save the shells to make a tasty stock: Simmer, in enough water to cover, for 10 minutes, then strain. The "vein" running along a shrimp's back (technically the dorsal surface, opposite the legs) under a thin layer of flesh is really its digestive tract. To devein shrimp, use a paring knife to make a slit along the length of the shrimp. Under running water, remove the tract with the knife tip. Be sure to buy "dry" sea scallops (scallops that have not been treated with sodium tripolyphosphate, or STP). Scallops that have been treated with STP ("wet" scallops) have been subjected to a chemical bath and mushy and less flavorful. Tip: To scrub mussels, hold under running water and use a stiff brush to remove any barnacles. Discard any mussels with broken shells or any where the shell remains open after you tap it lightly.