For many years I identified with this song, not all the words, but because the one verse says: 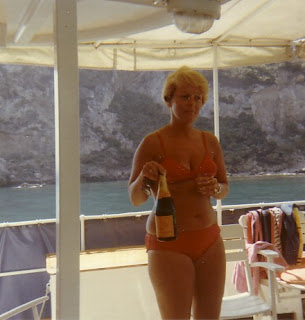 I heard this on the radio yesterday morning and it made me think of the times I did spend in the Mediterranean on my parent's yacht. I used to spend my vacations with them - they were based in Malta and I would join them either there or wherever else they happened to be. Well here's a not very clear photo of me sipping champagne on a yacht with one of the Greek Islands in the background. I'm afraid I don't remember which one. The reason we were drinking bubbly was either my mother's birthday, August, or mine in September. 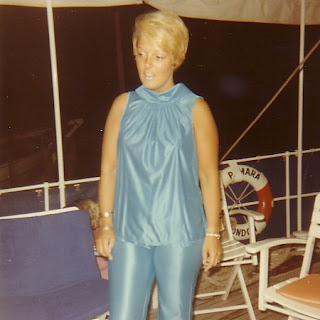 Here's a clearer one, ready to go ashore for dinner - looking at the surrounding photos, I think this must have been in Corfu. One year we sailed from Athens through the Gulf of Corinth and out the other side as it were. Visiting all kinds of towns and villages on the way, not the least of which was Delphi, one of the homes of the gods. The next photo is definitely in Corfu as I recognise the bay where Pamara (our yacht) is 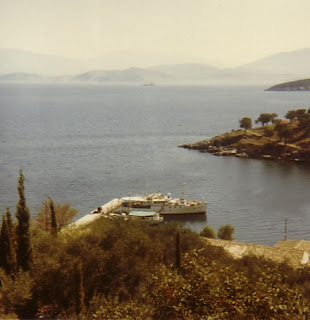 moored. For those of you who haven't been reading this blog for very long, my parents lived on a boat from shortly after World War II and when he retired, my father sailed to Malta to live. I spent my teen years living on a boat and being dragged all over the place in all kinds of weather. Originally my mother and I spent most of our trips lying on our bunks feeling sorry for ourselves. Eventually we got more used to it - on a five hour trip I used to tell myself 'its not worth getting sick'. However, I loved it when we arrived wherever it was, be it France, The Netherlands, Germany, Denmark, Norway and later various ports of call in the Mediterranean. Like I said, I have been to Nice and the Isles of Greece. When I think now of those leisurely days in the Mediterranean sun, I am wallowing in nostalgia. We picked up a current copy of Food and Drink from the liquor store this week and with it came a little pamphlet about beef. I thought this ground beef recipe would appeal.

Kids love ground beef, especially when served as these brochette-style Beef Bites with plum sauce for dipping and some crunchy slaw on the side. Or if you'd rather, serve as burgers with slaw as a topper. Make the slaw first to allow time for flavours to blend. 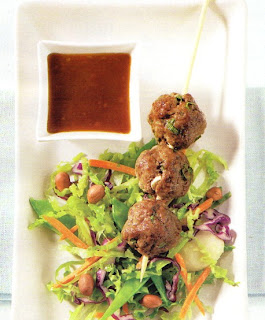 Thread 3 or 4 meatballs on each skewer and serve with speedy slaw. Makes about 7 servings.

Whisk together 1/4 cup each rice vinegar and granulated sugar, 2 Tbs vegetable oil, 1-1/2 tsp Dijon mustard and 1 tsp sesame oil. Toss with half a bag coleslaw salad mix, 1 green onion and 1/2 cup each snow peas (halved lengththwise), canned, sliced water chestnuts (drained and halved) and roasted shelled peanuts (optional). Can be made up to a day in advance. Makes about 4 cups.

By the way, that damned song is stuck in my head now. Grrrrrr.

Email ThisBlogThis!Share to TwitterShare to FacebookShare to Pinterest
Labels: Asian Beef Bites with Speedy Slaw, Corfu, Never Been to Me, Pamara